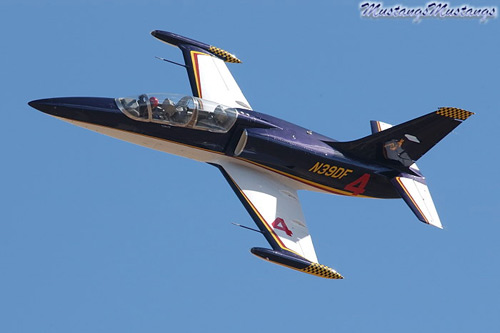 The Other Classes
story and photos by Curtis Fowles

Let's start with the Sport Class They are much faster than I thought they would be though. Rounding the course at a blistering 330 mph will get your attention. The Thunder Mustang piloted by John Parker could not hold on to 1st place as Daryl Greenamyer sneeked out the victory at nearly 334 mph. Parker was second at 332 mph on Sunday. Parker was leading the race at the start and was looking good, but Greenamyer just kept coming at him and finally got the pass. Once in first Greenamyer held on until the checkered flag flew.

The course covers about 6.4 miles and is a flying start like the big boys. The races are fun to watch, but those little guys are hard to shoot (photograph). They are coming at you hot and are smaller than the T-6s and the unlimiteds.

The Lancair and the Glasair are two popular aircraft in the sport class. The Thunder Mustang is a very cool looking sport class racer. It is a scaled down model of the P-51, 3/4 scale I believe. It has a V-12 Falconer engine and 2 tandem seats. As you can tell, performance is great. This year I only saw the blue/white #51 at Reno.

The T-6 class has been around for a while and 18 of the fastest qualifiers are accepted into the class. With speeds in the low 200's, the T-6 is not a fast aircraft, but was never meant to be. Owners and crew chiefs get the max out those radials and try and clean up that big airframe. You will see lots of "race tape" and plenty of polishing to squeeze a few more mph out.

The T-6 may not be the most exciting to watch, but I bet it's the loudest. They are also very photographer friendly as they cut the course at moderate speeds and are very large targets to capture on film or memory. Most of the time the races are fairly close. Speeds range from around 200 to 238 mph. The top 7 were at least 223 mph, so that brings them close together for some good racing.

The newest class are the Jets. L-39s are fast and look good too. They can be raced stock at speeds over 400 mph. They are also "easy" to maintain compared to an unlimited Gold racer.

Curt Brown won the Gold at 439 mph with Sal Rubino close behind. Dave Morss was third and John Bagley was 4th. Note the names, all racers of other classes. The Jet Class is young and looking for some expansion of some differing types in the future.