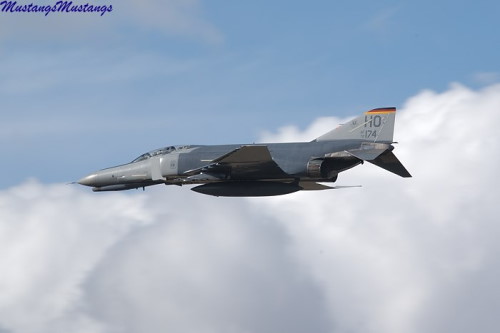 The Reno Air Show
story and photos by Curtis Fowles

The show at the Reno Championship Air Races is very entertaining with non-stop action to keep an aviation or motorsport fan smiling for hours (and days). This is a week long event with racers and crews showing up the saturday before race week to set up the pits and get ready. Practice on Sunday, qualifying starts monday and the heat races and airshow start on Thursday and finish on Sunday.

The line up consists of Julie Clark in her T-34 and 27,000 hours of flight experience. Graceful and smooth describe her act with red, white and blue smoke in trail. Kent Pietsch puts on a great and funny show in the Interstate S-1 Cadet -not too bad for losing an airleron. Mike Goulian, flying the aerobatic competition CAP 232 with 300 hp just rips up the sky. The bright green, red and white Castrol painted monoplane is put through the ringer by Mike. Two other high performance aerobatic routines are performed by Greg Poe in a Crucial Edge 540 and by Sean Tucker from Salinas, Ca in the Oracle Challenger biplane. Sean performs manuevers that tax him from +11 to -7 g's! I lose my lunch thinking about that.

I can't remember which day it was but I was standing by watching the opening ceremony. It is done very well, in good taste and fires up the soul - makes you proud you live in a free country and are able to enjoy this fine event. A C-130 hauls some military jumpers up to altitude for the classic jump to begin the show. Shortly after, a flight of 4 F-15s come by and catch everyone's attention. Between Races, there is the US Navy Legacy Flight which consits of an F-8F Bearcat, F-18a and the only flying FJ4 Fury - very nice. After another race, the USAF Heritage Flight takes skyward and performs with an F-16 and 2 P-51 Mustangs. Yea, cool indeed.

The last show of the day was my favorite. The F-4 Phantom display was awesome. I remember as a kid, the F-4s flying in airshows as Blue Angels. The Phantom is a formidable looking fighter jet. The display was done very well, but I could only catch a little of it because it was right before the gold unlimited heat each day and we were traveling out to the pylons on all but 1 day, when I got cut in front of for the photo bus and lost the chance. Because of that &$%@ guy I was able to catch the last few passes of the F-4 demo and get a couple quick shots as I was walking back to the show line. Although I was bothered at the time, everything is A-OK.

New for 2004 is the Red Bull Race. Near midfield, there are 5 sets of (2) portable pylons that are filled with hot air. The pilots negotiate through the pylons and perform compulsory maneuvers between pylon passes in the fastest time possible. The Red Bull Race has been done in Europe as well as in the USA. The pilots are: Peter Besenyei from Hungary, Paul Bonhomme from the UK, Kirby Chambliss from USA, Mike Goulian also USA, Steve Jones from the UK, Mike Mangold and David Martin from the USA and Klaus Schrodt from Germany.

This is a fun race to watch and the Red Bull Crew performed the set up and take down very quickly to keep the other show acts flowing well. We (the media) were invited to watch some race practice early one morning. That's where most of these shots came from. We were able to get closer than during the real races in the middle of the day. I was usually not around that part of the field when the races took place. Take a look at some of the paint jobs. Up close these aircraft are in exceptional condition and the pilots have to be way up on their game to keep the race safe but entertaining. We look forward to seeing more of this.

There are some very serious display aircraft because the folks at Rolls Royce give out their Aviation Heritage Trophy to the most outstanding vintage aircraft that is over 45 years old and in original prestine condition. This award began in 1999 and I know that a few excellent Corsairs and a Fairey Firefly are among the winners and I think also a Waco, B-25, T-6, Sparten Executive and a Staggerwing. The award have grown to other catagories since 2003.

You will see in these pics that there are many types of aircraft on display, from vintage private aircraft to an ex Soviet Mig 17. It also a good place to catch some of the racers taxiing by before takeoff if they are taking off to the northwest on 32 or west on 26. There are vendor displays in the pit areas like that new Javelin jet aircraft. I would like to see that thing fly. There was an amphib there and some new single-engine private aircraft. Cessna was showing of their glass-cockpit Skylane - that's cool (expensive but cool). Lycoming had a big tent up with lots of Lycoming wear. Plenty of vendors are just behind the grandstands with many different types of food and race goodies.