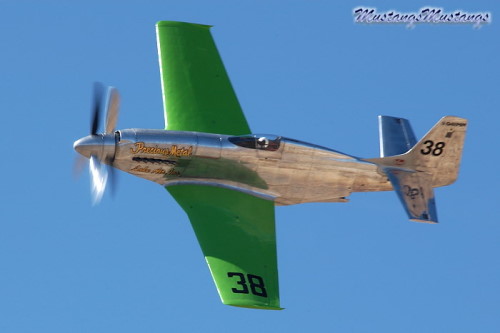 The Silver Unlimiteds
story and photos by Curtis Fowles

The weather was starting to come in and the Silver race had to initiate a modified entry into the chute to start the race. Weather was building to the southwest covering the nomal big circle route.
On Sunday, the silver unlimiteds consisted of many Sea Furies, a few Mustangs and a Bearcat. Howard Pardue was able to move up from Bronze after Friday's heat race and stuck here in Silver for the last 2 days. Ron Bucarelli in Precious Metal, the highly modified P-51 with the griffon engine ran well in the upper 300's during the week but pushed over 400 mph on Sunday which was good enough for third after Brent Hisey in Miss America won Silver but gave it up to to move to gold. Bucarelli was doing very well, before the Sea Fury of Stewart Dawson snuck #38 on the outside.

Ike Ennns in his P-51 Miracle Maker, #50 flew very consistent during the week with speeds in the 370's and 380's. He finished 6th in Silver at 383 mph. Brent Hisey in Miss America took first in Silver on Sunday pushing to 417 mph. He gave 1st to Riff Raff and moved up to gold. The rest of the Silver field had round engines. Howard Pardue, one of two Bearcats at the races, finished just behind Ike Enns in Silver 7th at 382 mph.

1st place in Silver was awarded to a Sea Fury, Riff Raff, flown by Robert (Hoot) Gibson at 414.2 mph. Stewart Dawson in Sea Fury #105 Spirit of Texas (nice paint) took second at 414.1 mph. This was a great battle to watch. Kinda looked like some formation work around the pylons. Third was taken by Precious Metal and Ron Bucarelli, fourth by Sea Fury #114 Argonaut with Dennis Sanders as pilot at 398 mph. Fifth place has a P-51 pilot who likes to fly Sea Furies too, Dan Vance, in Sea Fury September Pops. Dan came in at 386 mph.
Well, the silver race was very entertaining to watch. Bob Gibson and Stewart Dawson put on a great show as those two Sea Furies flying fast and tight, made me wonder why I don't use video sometimes. The modified start seemed to work just fine as they came down the chute. Brent Hisey knows he can't follow those Sea Furies too close so he did the right thing and make sure you stay ahead of them whenever possible. A good race, well done by all.