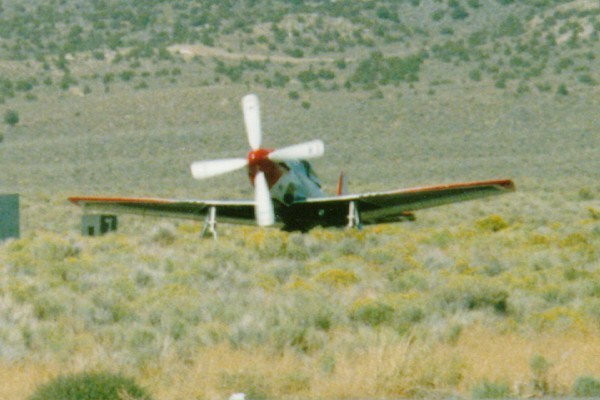 << Case # 49
Who?   Case # 50
Case # 51 >>
P-51 Who? Viewer Responses
Wiliam D. Yoak
This one is a giveaway after a closer examination of the photograph at Reno (probably taken in 1976 or 1977). The subject is the former Thunderbird which was owned and raced by Marvin Gardner or Lefty as he is most commonly referred to as in the aviation community. Lefty took first place at Reno in 1976 in the Championship with this aircraft. This was due to the fact that there was some combined attrition among the front runners of this race. The apparent winner became disqualified after crossing the race deadline and the other fast contenders suffered blown engines and other mechanical difficulties.

This Mustang s/n 44-73704 is still registered as N6168C,but was acquired by Louis Shaw of Breckenridge, TX in 1994. It is now in a polished-bare-aluminum state and carries post WW II markings (USAF ).It appears to have received some beautiful detail work as it was judged Best P-51 at the Sun N Fun airshow in 1999. As always, I look forward to having some more Mustang cases to look up.
Mike Meek
Looks like Lefty Gardners thunderbird N6168C. now owned by Lewis Shaw. Looks great all polished with that H prop.
Aaron Olden
That Mustang Who Case 50 is Lefty Gardner's P-51D Thunderbird sorry I don't have fact sheet with s/n and history but I'm sure that's Lefty's Mustang.
Leo Smiley
This is N6168C, SN4473704 When owned by Lefty Gardner and raced as #25 "Thunderbird". Winner of the Unlimited Gold in 1976. Now owned by Lewis Shaw as FF-704.
Chad Veich
Looks to be Lefty's "Thunderbird"
bob keil
i rode with lefty in this mustang in 1982. after eating dinner with him at his home we went for a ride that i will cherish for the rest om my life. i took a picture of his mustang and it looks just like the picture on internet. i love the mustang and think of lefty and his ride all the time. thanks thanks
scott huffman
Bob

I rode with him in 1981 down in south Texas. Lefty really put his Mustang through its paces. Cuban eights, split s, 4. 8point and slow roles as well as simulation of the plan doing a pylon turn about 200 feet off the deck a bit over 400 mph. Lefty made the turn at 90 degrees. It was THE ULTIMATE HIGH. I have to say that Merlin was the loudest sound I have ever experienced as I took the helmet off for a few seconds.

He landed the plan at his small airport across from his home in Mercedes, taxied across the road and shut it down in his driveway. Five of his kids came out and were climbing all over the plane. Prior to landing he was doing Cuban eights with the bottom run right over his house. We the loaded nine people in his Cady and went across the border and had a great meal.

My wife was with me and I have many shots of her in White Lightning.

I will never forget him or the experience. Too bad none of the Mustang pilots can or will fly their Mustang like Lefty. He was the best.

While in his house he showed me his trophy room and introduced me to his wife, Sharon.

He was amazed I did not toss my cookies during the ride.

What a day with a real Texas icon.

God rest his sole and as long as I live he will never be forgotten. What a delightful person and pilot. He was the only CAF member that had checked out in all the CAF planes at the time and I doubt there will ever be another Lefty. He gave me a poster taken of him flying over the Golden Gate bridge shortly after winning the Gold Cup in 1976. You correctly closed the case without a doubt.
Case Closed! 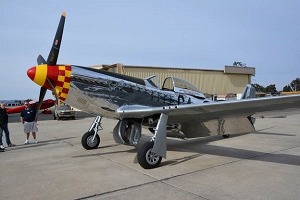