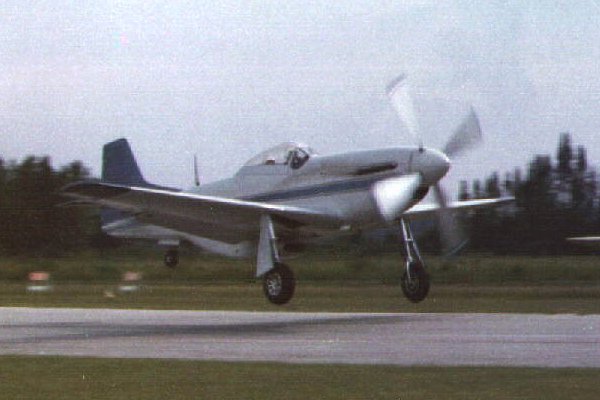 << Case # 32
Who?   Case # 33
Case # 34 >>
P-51 Who? Viewer Responses
MustangsMustangs
We don't know anything about this P-51 or about the photo date/place.
Good Luck!
William D. Yoak
This P-51 appears to be identical to the mustang which was raced at Reno in 1966 and 1967 as #77 'Jack Adams Twinkletown Special'. The owner and pilot was Jim Fugate and the aircraft was based out of Lake Oswego, Oregon. I believe that this is the aircraft (case #33). The paint scheme looks identical but there is some lack of detail in the photograph due to its resolution quality. I must admit however, that I do not know the final outcome of that aircraft or pilot since their last year at Reno(1967 or 1968).
T J Johansen
Looked at case #33 and remember having seen photos of this one before. It is N117E 44-73832 probably shot in the early 70's. This one was later painted as "Color me Gone" in a spurious USAF paint job before being bellied in by pilot Johnny Williams around 1978. Passing through several owners the rebuilt Mustang now wearing 357th FG colors as "Hurry Home Honey" went down on a cattle ranch on Nov. 21, 1992 killing Owner/pilot Harvey Hunewill. Seems as though he rolled while too low and hit the ground!
MustangsMustangs
Looks like we need some confirmation from the above 2 accounts.
Daniel Shehady
Case#33 solved by T.J. Johansen is correct. Harvey Hunewill went down over a cattle drive near Smith Valley NV in 92,and was killed performing a maneuver at low altitude and very high speeds. His plane was destroyed,but i believe the plane was bought,and is now in the restoration phase. I may be wrong? Harvey was a family friend and is missed very much.
Perry Trest
I can't confirm if the pictured P-51 became Color Me Gone.

My uncle, John C. Williams, owned Color Me Gone in the '70s. He changed the color scheme from what is seen in this photo. My understanding is that he removed the comm gear from behind the seat and modified the space to carry a passenger. One Thanksgiving in Savannah, Georgia, I witnessed this amazing aircraft making a vertical climb, with clearance from the tower of course. A full throttle pass down center field at 500 feet, and a then nose up! The 12-cylinder Rolls Royce engine was thundering and shaking the ground. It was the most impressive thing I had ever witnessed.

John crashed this plane in Mississippi when the engine failed, en route to pay my wife and I a visit. He never made it to my house but he fortunately walked away from a wingless Mustang after clipping some poles or trees. I have the news paper article from the accident and some in-flight photos. He was not so lucky a few years later when he was killed after crashing a Hawker Sea Fury in Texas. If any of you have information about that accident, I would love to know more about what happened. Thanks for keeping these aircraft and owners alive on the internet!

Perry
Marc Medina
Hi Perry,
I used to live in Tampa and met your uncle a couple of times. I have quite a few pictures of the Mustang and also his P-40N. We also have some super 8 movie film of at least one airshow at Tampa Downs - which includes a "straight up" take off run as you previously described. I'm in California now, but feel free to call me at 415-386-7483. I can make copies of some of these pictures and send them to you.
Thanks,
Marc
Marc Medina
Just found this picture of Johnny's Mustang and me. I'ts before 1975 but I can't tell you what year for sure.

https://www.facebook.com/photo.php?fbid=10150933744960338&l=41a532923e
Perry Trest
Thank you for sharing the photo Marc. This photo appears to be prior to the final paint scheme, a work in progress I assume. The P-40N was also an impressive flying machine. I have photos of both aircraft in flight. Please forward any photos that you have to colorist@perrytrest.com and I will return the favor. I own a video post production company in Nashville and would love to have a copy of the motion picture footage. My mother (john's oldest sister) would love to see this as well. I would be more than happy to pay for a transfer to DVD or QuickTime file.

Perry
Don Stewart
Hi Perry,
I met your uncle back in 1975. My then business partner and I flew out to Tampa to look a
Beechcraft Bonanza he had for sale (N25744). We took it for a test flight and made a deal.
I was a commercial pilot at the time and my partner was just learning how to fly. The next
day, having no interest in flying cross country to San Jose Ca., my partner and Johnnie’s
corporate pilot took off for a long introductory flight to the west coast. The next day and a half were one of the best times I have ever had in my life. After the departure of the Bonanza from Tampa Intl. Jonnie ask my join him at one of his hangers to see a couple of
airplane toys he had. In the hanger was a beautiful AT6 Texan an the most beautiful restored P51Mustang I had ever seen. It had a pearl esent white and blue nose paint job with a chrome propeller. Even the inside of the landing gear doors were chromed. The plane was stunning.
Then Johnnie ask me if I wanted to go for ride. My response was “hell yes”. We took off and
Johnnie put Color Me Gone through her paces. Rolls, loops, hi G turns, what a ride. The one thing I remember most was that the P51 sounds so wonderful when your on the
ground, but when you’re in the cockpit it is unbelievable loud. As you probably know, Johnnie a great pilot and a little bit crazy. Upon our return to Tampa Internationl Johnnie requested a 360 overhead landing. He knew all the guys in the tower and of course the 360
was approved. We came down the glide slope at well over 350 knots busting the speed
limit by over a 100 knots. Over the runway numbers Johnnie pulled the 51 inverted. At the
top of the loop we were at 4000 feet looking through the top of the canopy down at a 11000 foot runway that looked like a 3000 foot runway. At the top of the loop, inverted, the gear and full flaps come down and down we go on the back side to land. Needless to say with speed we were carrying we used the whole runway. The next day I had trouble getting a
flight out of Tampa to San Francisco so Johnnie flew me to Atlanta in the 51 to cetch a flight
back. Your uncle was a great guy, I am sorry to hear about the demise of Johnnie and of
Color Me Gone
Perry Trest
Don,

Thank you for sharing that story of your time with my uncle John. He had some amazing airplanes and automobiles. I spent a couple of weeks with him in Tampa after I graduated from high school. I flew as a passenger in the Bonanza that you made the deal on. John was a lot of fun to hang out with. 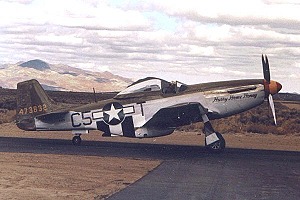