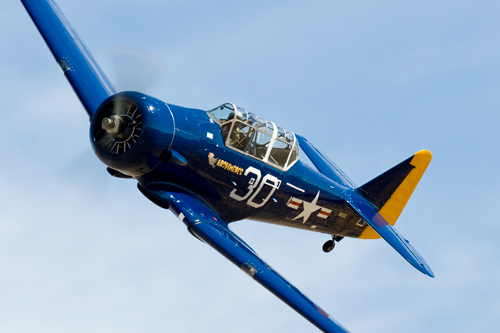 Other Classes
story and photos by Curtis Fowles


One of the favorites to win the Super Sport Class was #42 Kevin Eldredge in the NXT Relentless. Eldredge finished 2nd last year to Jon Sharp in another NXT. Sharp did not make Reno this year so that put Eldredge right up their on top coming into the races. He will have the Thunder Mustangs hanging real close by, and the egg. During a qualifying flight there was a sudden engine stopage and that caused the prop to seperate from the engine and fly apart and off the aircraft! Eldredge is a pro and handled the emergency and landed safely, but is out of racing for the week.

As you might already know, George Giboney lost an engine during lap 4 of the Gold Final on Sunday and in the high gusting winds set up to land on 26. He made it to 26 but did not have enough altitude to straighten out in the crosswind. The aircraft went off the side of 26, tumbled, and came to rest on the gear with the engine and firewall torn off. Thankfully, Giboney escaped without serious injury. After the race the remaining racers elected to land on closed runway 18 because it was into the strong wind. Reports are that John Parker went off the end of the runway but did get hurt. Runway 18 is by the ANG Base and is in bad, bad shape except for a new strip of paving in the center. The strip is about (guess) a couple of car lanes wide. Not an easy target in strong winds.

The T-6 Gold was canceled due to the gusting winds.