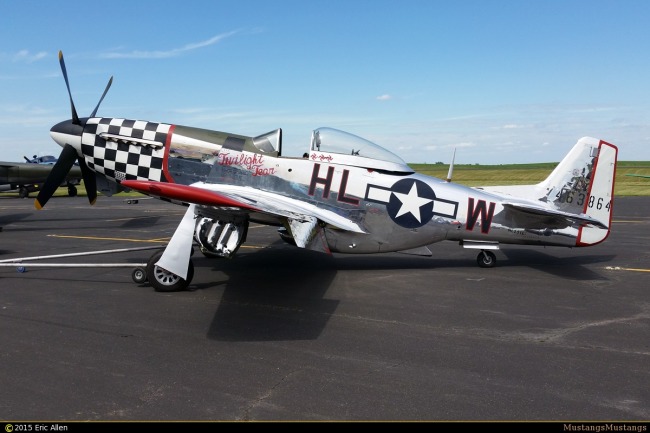 1970: Nov 23, N251L, Revoked by FAA for not filing FAA Registration forms
1986: Oct 13, Iceland - wreckage was saved from scrap by Petur Jonsson and Michael Valdimarsson. The wreckage was being stored in a scrap yard, awaiting disposal.
1991: Feb 25, Iceland CAA issued a letter stating that the wreckage of N251L was of no commercial value and was released to Petur Jonsson and Michael Valdimarsson of Reykjavik Iceland and considered to be their property.
1991: Feb 25, Cham Gill, Central Point OR, purchased wreckage from Petur Jonsson, Iceland
1991: May 14, N42805, 44-63864, FAA approved documents provided by Cham Gill and issued registration
1991: Jul 29, N42805, Kenneth Hake, Tipton KS

Another P-51 in Israel reported to be 44-63864 was registered 4X-AIM. It was sold to a Swedish owner. Upon arrival in Sweden, the paint was stripped, Swedish markings were reported to be found on the wings and in the tail the placard with the RSwAF number of 26158.

Indeed, N-251L was my P-51. I bought it from the Israeli Air Force through Israel Aircraft Industries, IAI, who modified it to a two-place, installed all new Lear avionic and autopilot systems, painted it and obtained FAA Limited Category Airworthiness in 1960. I flew it from Tel Aviv to Athens across the Med (IFR) and from there to my home in Geneva, Switzerland where I kept it until I sold it to an American buyer (name forgotten)in 1963.
I modified the aircraft by installing the Trans-Florida Aviation (Cavalier) tip-tanks and larger canopy.

The American buyer hired a French pilot to ferry the aircraft back to the U.S.. This pilot had never flown a P-51 before. His first landing was at Kevlavik, Iceland after a non-stop flight from Paris Toussus-le-Noble airport. The pilot flared too high and while at low airspeed apparently applied full 61" of noise. The aircraft rotated leftward, the wing struck the runway and the aircraft began to cartwheel down the runway. The engine broke off as did both wings and the aft fuselage leaving the cockpit section intact and on its side. There was no fire. The pilot was alive but during these violent maneuvers his head got pretty busted up. He later died of these injuries. He had worn no crash helmet and the shoulder-harness was found tied in a knot and dropped behind his seat. This was a survivable accident, but some folks know better than others.
...
The data plate from my P-51D, N-251L, which crashed in Iceland, was apparently removed by someone as it is no longer there and, I am told, there is evidence of it having been chiseled off.

What confuses me is that another P-51D has been registered in Europe bearing the same serial number as mine, 44-63864. There is evidently some mix-up here but I have a solution to discovering if the recently registered P-51 with the same S/N is indeed my former aircraft.

An examination of the wings should reveal the installation of two-to-three additional spars which were installed to accommodate the extra weight/load the TransFlorida 110 gal ea. tiptank installation kit required. The wing skins were removed and replaced for this "no-small-job" installation. There should also be evidence of tank brackets, fuel line plumbing and electrical wiring - or the removal of same.