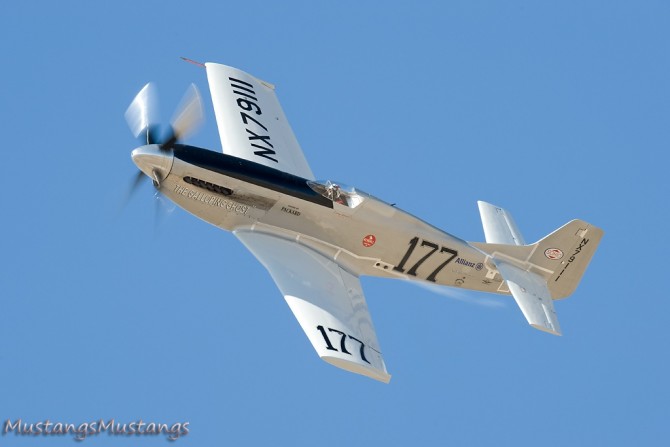 
2005: Great News! Leeward will bring back the "Ghost". N79111 will return to air racing as the "Galloping Ghost".
2006: The Ghost was not ready in time to race this year
2007: Parts of the aircraft are all around the US trying to get finished in time for Reno. We sure hope they make it. I've seen plenty of parts in Dan Martin's hangar over the past several months.
2008: Restoration continues
2009: working hard to make Reno Air Races in September
After several months of exhausting work, the racer was just not quite ready to compete in the 2009 Reno Air Races. Jimmy Leeward and his crew worked some very long days and nights doing everything they could, but there was just too much work and not enough time. The Ghost has flown though, which is great news!

2010: Reno - the Gold Race that Never Was. Sunday Gold canceled, so we do not know how fast this racer really is. It looks fast and Leeward showed some speed on a few laps, but working from dead last on Thursday, he was never really challenged as he climbed the ladder to make it to the finals. The race on Sunday was canceled due to high winds.
2011: September -- Counting the days . . . again.

Jimmy Leeward perished in the crash of the Galloping Ghost on the third lap in front of the main grandstands. A mechanical issue developed causing a pull-up and roll over the top and then a near vertical decent before impact. Jimmy was a legend in air racing and a veteran P-51 pilot with thousands of warbird hours. He was a gentlemen and man of his word. He loved to race and fly. He worked for five years to get the Ghost ready to race. This year he and his team came to Reno to win. The Ghost was very fast and they were contenders for first place.

He passed us at pylon 2 shadowing Rare Bear and challenging him for 3rd place. By the time he pulled up off the course he had possession of 3rd and setting sites on Will Whiteside in 2nd. Leeward came to race and to win. He was very no nonsense and down to earth. He was 74 and lived in Ocala Florida, a friend to all in unlimited air racing.

Everybody was a fan of the Ghost and his Team. The return of the Ghost sparked a renewed passion in air racing. Reno will not be the same without Jimmy Leeward turning laps. Condolences to his family and crew who have supported the races for many, many years.