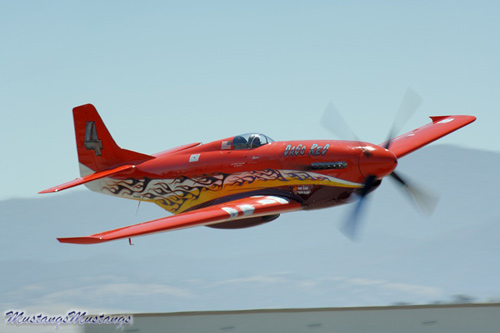 Rumors hit fever pitch as the upcoming buyer to be was speculated by everyone who can post a message. Well, the right buyer for Terry Bland did not come by and Dago was spared an uncertain future.

This year for Dago Red will be unique. It is common for owners to have pilots other than themselves race their aircraft. It is a bit uncommon to have a pilot and his crew (other than the owner's), race their aircraft. The Dago Red crew of 2004 or previous years will not be the crew this year. Dan Martin, with crew chief and engine builder Mike Barrow, and Dan's crew from Ridge Runner will be putting the wrenches and wax to Dago Red in 2006.

As you can see in some of these pics taken in August 2006, the wrenches are turning as you read this. Dan and a few of his crew are working every day to get the red racer ready for Reno. So far, he likes the progress being made and the potential of his team. Barrow's "Mouse Motor" was installed and on Aug. 15, the shiny prop was mated to the nose of the orange merlin. Engine runs will be very soon thereafter.

For those of you who wonder how Dago Red is being handled, rest assured, Dan's crew is taking very good care of her. Every caution that was taken when handling Dan's own "Ridge Runner III" is being exercised on Dago Red - a sign of profesionalism and respect.

On August 17, they fired up the Sparrow Mouse Motor for the first time. Mike Barrow, aka "Sparrow", climbed in the red racer and fired her up. Everything went smooth. This mouse motor sounds sooooo good! You all know how good a stock merlin sounds, right? Now, double the ponies and imagine what that sounds like. There was a short pause to fix a small hydraulic leak. Then Dan made everyone wait for the restart as he "wound the rubber band" for Mike. The test run lasted about 15 minutes with everyone smiling at the end.

After several cycles of engine runs, checked plugs and examined oil screens, Mike Barrow gives Dan the thumbs up to go flying. Terry Tarditti, owner of P-51 "Comfortably Numb", is Dago's crew chief. He has been working hard to help keep everthing in order. As crew chief you can tell he has the reigns on everything and everyone. August 26 was the first flight after the Sparrow Mouse Motor was installed. A small crowd of friends, wrenchers and bums gathered to hear the music. Dan was very pleased with the performance of the engine and the prop. Answers like "baby's butt" and "silk" were heard when asked how smooth everything was running at different power settings. Next up is more test flights with added coal put to the Sparrow merlin. Two weeks to go and the lights are green.

After a few more test flights, a few bugs have been found and dealt with. The carb was running rich and leaving Dave a lot of black to clean off the side. Terry T. took the carb to Tehachapi, Ca and they did a once over and then Terry brought it back. After the carb issue was solved, the polished prop of Dago Red began to bark. The cuff on one of the blades was showing some problems and it was decided to make a change to Ridge Runner III's cuffed prop. Then, the nose gear bearing was growling a bit and replaced.

More test flights just before Reno and Dan and crew were happy and ready to go.

Once at Reno, they flew in the Sunday qualifying session at mid power to test things out. No time was called for. Everything went well. On Monday, more power was added with speeds in the 420's. Again the green light to push up the power the next day. During the Tuesday qualifying session, Dan bumped up the power and took some fast laps then called for the clock. Dago sounded so good coming around pylon 2 where I was lucky to be.

He looked good and fast as he past the home pylon at the start of his timed lap. Then as he blew by us at 2, Dan's line was not the same. He moved up to a higher line and then I hear a few pops. Between pylon 3 and 4, Dan Martin calls a mayday and pulls up and to the left toward the runways. No smoke yet, but he is definately having a problem. He crossed the approach end of Runway 8 and right turns to base and final. Smoke begins to pour out on base to final. The merlin is till turning and Dan is able to bring the wounded bird down safely, nice job!

The verdict is that an ADI check-valve malfunctioned causing an overheating situation. When the merlin overheats, watch out. A small hole was blown in the side of the case and oil covered the sides of Dago Red. The Sparrow engine was running great, but it has to be cooled constantly.

Well, Dan and crew have another Sparrow engine in the pits. Time for a long night working. They had the spare race motor running in Dago Red by 8am the next morning! What a fantastic job. But, hopes were dimmed when they found a prop leak after the morning run. Not enough time to pull the prop and fix the leak before the last chance qualifying session. Dago will have to sit out.

Or will they? Rules say that the 27 fastest qualified unlimiteds will race. If there are less than 27 qualified by Wednesday, the field can be filled with other racers that are able to race that have not qualified. Dan has some friends in air racing as a few of the already qualified racers were ready to bow out, so Dan Martin and Dago Red could get into the field. Yee Haa! The crew was very excited about that. On Wednesday evening, they were getting ready for another engine run to put some time on the new motor. Then they planned on an early Thursday morning flight to shake things loose as they had to race Thursday at about 10:30 am.

I left Stead after 9:30 pm and returned the next morning at 6:30 am to watch Dago's flight. As I walked towards the Dago Red pits, something was not right. Not too many crew around, very little activity. I then saw Sparrow and asked him what was up. He told me that after the night run (that went well), Terry stayed and pulled the oil screens to check things out. They found a bit too much of the wrong kind of metal in the screens and decided it was not safe to race with that merlin. As Mike put it, "it's a matter of when, not if" referring to the chance of the motor blowing.

So, an emotional roller coaster for Team Dago Red is over for 2006. They helped other crews out for the rest of week as needed and enjoyed the races. I was able to talk to Dan Martin on Sunday evening as many were packing it in and going home. He was very upbeat and already talking about Reno 2007.

So the red racer, #4, Dago Red, strapped around the fiesty Dan Martin, will likely be seen again.

Thanks to the Dan Martin, Mike Barrow, Terry Tarditti and the crew of Dago Red for their awesome hospitality to me. They have to push me out of the way once in a while, but they let me come back.