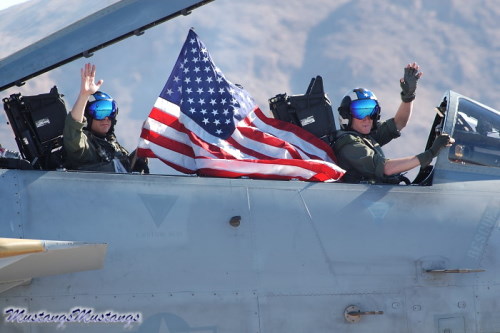 When you are at a USAF base airshow, you will get some great flying displays by the best the Air Force has to give (Navy too). The US Navy performed twice today. The F/A-18 performed in the morning and the F-14 Tomcat flew what was called the last air display by the Navy F-14s.

The stealth aircraft - the F-117 fighter and the B-2 bomber - both flew, but the B-2 must have only flown on Saturday. We welcomed the passes by the F/A-22 Raptor. The F-15C put on a great show and was also in the Heritage flight. An A-10 Thunderbolt II put on a very nice morning show for everyone and came by for a real sloooowwww and dirty pass. And of course the Thunderbirds are always a cool perfomance. The Raptor did not perform a full-blown display like the F/A-18 and F-15, but came by for a few picture passes. The F-16 will get its chance with the Thunderbirds.

But what really hit the spot? Well, just look at all the pics on this page and you might be able to answer that question easily. Just after noon, a swing-wing fighter with two aboard, "Opie" and "Smokin' Joe", put on the best F-14 show I have ever seen. It was not flawless, but it was powerful and fun. Speed will always get you pumped up and they brought the speed. I am really bummed that I could only be here one day. I would have been more prepared for their loooowwww takeoff.

As you can see by their expressions when they taxied back with the canopy up, they were fired up and trying to hold it back. They put the hammer down on that last swept-wing pass. I can't belive I even got them in the viewfinder. This was announced as the last F-14 demo season and Las Vegas was one of the last shows of the season. Hey, if we give them enough positive feedback, maybe they will come out in 2005 for an encore performance? We can only hope. In about 20 years or less we will be watching an awesome performance by an outdated and worn F/A-22 demo.

The USAF Thunderbirds closed the show with a super performance as expected. Nellis AFB is the home of the Thunderbirds and they put on a great show for the home crowd.

Well, P-51s and warbirds ... or ... fast jets? Just the fact that I am contemplating this question tells you that the jets put on an awesome show. If you have not been to Vegas in mid November for Aviation Nation, put it on the schedule now!