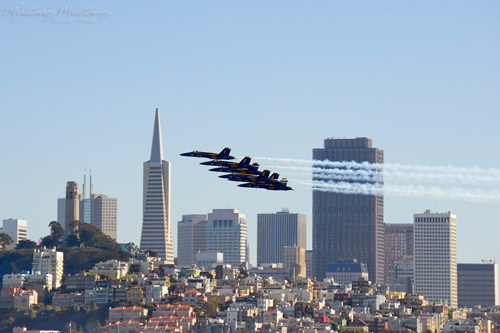 Heard of the Blue Angels? How about the USAF Thunderbirds? The have been around for many, many years. The "Blues" were flying F6F Hellcats at their first show in 1946. The Blue Angels have been flying the F-18 since 1986. The Thunderbirds began their tour in 1953. Hand selected, were two well-known WWII P-51 pilots, Buck and Bill Pattillo, both of which were in attendance at the 2007 Gathering of Mustangs and Legends. The Thunderbirds started out in the F-84 Thunderjet.

To my knowledge, there was only 1 aircraft that they both used, and that was the powerful F-4 Phantom. I remember seeing them fly the F-4s when I was young ... so cool.