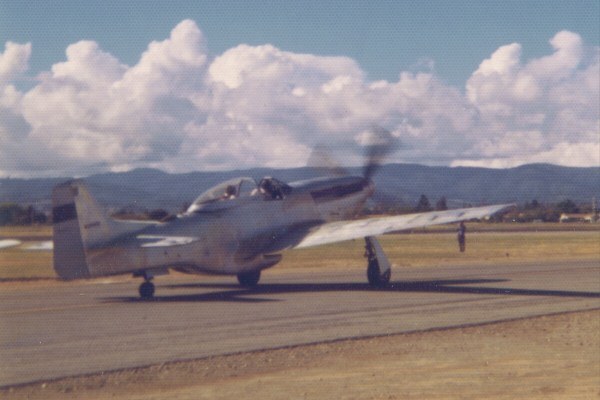 << Case # 79
Who?   Case # 80
Case # 81 >>
P-51 Who? Viewer Responses
Carlton Bailey
This is Ridge Runner from Hollister California, Owner was Dan Martin. Not sure he still owns it. This was taken about two years before he painted it.
Mark Ritchie
It is a two seater so it will only be one of 20+ 51D's so converted. There are no national markings but the serial number or writing on the vertical stabelizer is not readable on the browser - can it be made out on the actual print?

The rudder carries a black band that may be left over from an ETO stripe, indicating a war assignment in Europe - or it could just be a salvaged part from another a/c. I take from the mountains that this was taken in california - now it is a matter of searching the FAA registration number files (available on the web) for certification and civilian N numbers issued to two seaters restored in California.

That ought to narrow it down some.
Just as a wild guess, I think it is Robin Olds P-51 after it had been striped down for repainting.

Just a thought.
Another vote for Dan Martin's Ridge Runner III
Steve Hinton
This is the Mustang Pilot's club then from Half Moon Bay now from Hollister. The photo was taken at Watsonville in 1973. Jim Orton, John Crocker and Dan Martin took the Mustang there. I was there also with LeRoy Penhalls 51, N6519D, you show in another case #. Jim Maloney and I went to Half Moon Bay and helped them put the scoop on and finish up the annual right before the fly in.
Case Closed! 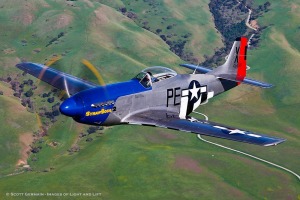