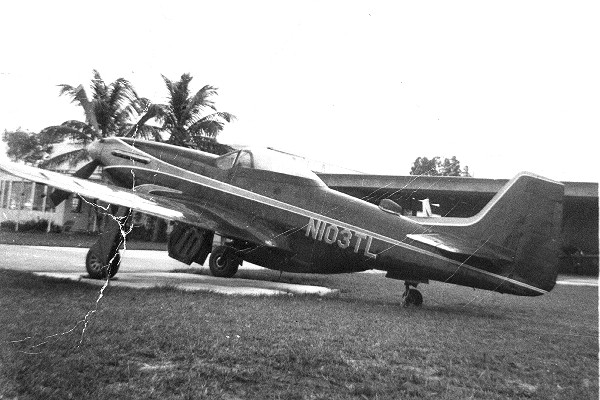 << Case # 7
Who?   Case # 8
Case # 9 >>
P-51 Who? Viewer Responses
Joseph Scheil
N130TL was ex RCAF 9287 with a US serial # 44-73422. This aircraft was reportedly shipped to Haiti, but that was a diversion. The P-51 was actually shipped to El Salvador with 5 other Mustangs from the states. It appears that all were lost - two midairs, two crashed from fuel exhaustion, one shot down and one lost to ground fire. Apparently these P-51s were flown by low-time pilots. It was rumored that N130TL was lost in a midair but this has not been confirmed.
James Church
Perhaps I can shed a little light on the identity of the P-51, registered as N103TL. I have the book "North American F-51 Mustangs in Latin American Service, by John Dienst and Dan Hagedorn (Aerofax Datagraph #1), and in it they make a brief mention of it. They show it as a P-51D-25-NA, serial 44-73422, and that it served in Canada as RCAF 9287. They mention that the a/c was destined for Haiti, but may well have wound up in El Salvador instead. No serial is listed for its service in El Salvador. They suggest that a diversion was created by saying it was going to Haiti, with the a/c being smuggled to Salvador instead. Hope this will help. If you do not have this book, try to find a copy as it is great for tying up "loose ends" likes this. I highly recommend it.

N130TL competed in the 1969 Florida Cross-Country race form Frederick, MD to Ft. Lauderdale, FL. The pilot of this P-51-25NA was Wallace Garrick and it carried race #4. He placed 5th in that race.
Joseph Scheil
Poor 103TL was one of the many Mustangs that was more or less an expensive plaything in the late 60's and didn't have much to do. At the same time Cavalier Aircraft in Sarasota Florida was making money refurbishing tired sportplanes into warplanes for Bolivia and Dominica among others and kept selling them whenever the Fuerza Aerea _______ could afford them. As known in 1969 there was a border dispute that grew into a small war, the infamous "Soccer War" precipitated by bad officiating at the World Cup. Suddenly facing a field of F4U-4,-5 's, El Salvador needed to augment their forces outside normal channels. Six P-51's were taken from the US civil ranks and some mercenary pilots as well. One pilot wrote an article for one of the magazines in 70 or 71, very depressing chronicle of Mustangs being flown by inept pilots and wrecked within hours of arriving. As a diversion Haiti was listed or described as a destination for those aircraft. 103TL was ex. RCAF 9287 and 44-73422. Of the other 5 unconfirmed aircraft and 103TL nothing further is known. There were two midairs, two lost to fuel exhaustion!!!!! and one shot down plus one due to ground fire. I had never seen her picture before you posted it..She must have been a sight to see after a good wax job under those palms.
Beautiful.
Steve Bricker
I knew Wallace Garrick, grew up in the house behind him after his retirement from the Air Force. A fine pilot, an even greater man, and my inspiration to get into recreational aviation. He is truly missed.
Richard Cosse
Regarding Mustang N103TL, I'm sitting next to its former owner from 1957 to 1959 C.J. Christ of Houma, La. rmmuseum@triparish.net
Bill Williams
Some one sent me a story about "Mustangs". I responded with my own experience with the wonderful airplane. In the early "60's" I was an Eastern pilot and one of my fellow pilots was a half partner in "N-103-TL.Just twenty three, I was the one that was trusted to make the low level, high speed passes in the bird at Opa-Locka airport in Miami. That usually after the long maintance periods that were required to keep her in the air.
This picture was taken at Holiday Air Associates flying service where the plane was based. It was home there until it made it's way to the South.So pleased to see her again!!
Bill Williams
Floyd Webb
This a/c caught my eye because of the paint scheme that bears a striking resemblance to another. I have a Jan 1974 copy of Gold Coast (FL) Pictorial magazine that features a mustang with the same paint job. It is #N1051S (race #4) owned by George Sullivan in Opa Locka. It also shows another person connected to the a/c Mark Henderson. On the cover it shows the late Ken Burnstine's mustang. Any thoughts?
Floyd Webb
Would seem that 1051 replaced this a/c?
Curtis Fowles
N1051S, 45-11371, when owned by George Sullivan had a very similar paint job to N103TL. They are not exact matches, but at a glance appear the same. Both were based at Opa Locka FL for a while, perhaps painted by the same shop.
Case Closed! 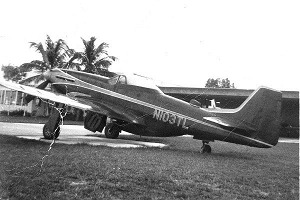