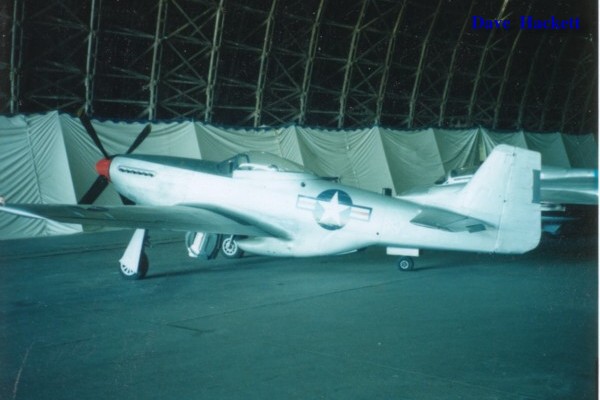 << Case # 70
Who?   Case # 71
Case # 72 >>
P-51 Who? Viewer Responses
Chad Veich
Just a stab in the dark here as I have no info other than to say it appears
to be on display inside the Tillamook Museum hangar. One of Erickson's
perhaps?
Jim Church
The location of case #71 MUST be the Tillamook NAS museum. In that case, my guess would be that it is a Mustang that was statically restored by museum staff from what I think was an airframe which had crashed during the war in Europe (I think). I don't recall where I had read this, or what the serial number for this airframe is, but I do remember that much of the airframe is made from fiberglass. There is no mention of it on the Tillamook Museum web site, but I know I read about it on line or in a magazine recently.
SndGld497
The somewhere is The Tillamook Naval Air Station blimp hanger . This old base has been closed for years, it is now the home of the Tillamook Air Museum. Many neat and rare aircraft including a Grumman Duck, Catalina and Boeing Guppy. I don't know the ID of that P51D however, and when I last saw it , it did not appear complete.
Rangoon
This is a photo of the P-51 located in the old blimp hangar at Tillamook NAS, Oregon.
Greg Bolyard
This p-51 is at the Tillamook, forgive the spelling, Oregon air museum. This mustang is not in flying condition , in fact it is empty inside ,and used to be a gate guardian at some air base somewhere.
Joseph Scheil
It's the Tillamook.
J Perri
#71 Mustang at Tillamook Naval Air Museum Oregan USA