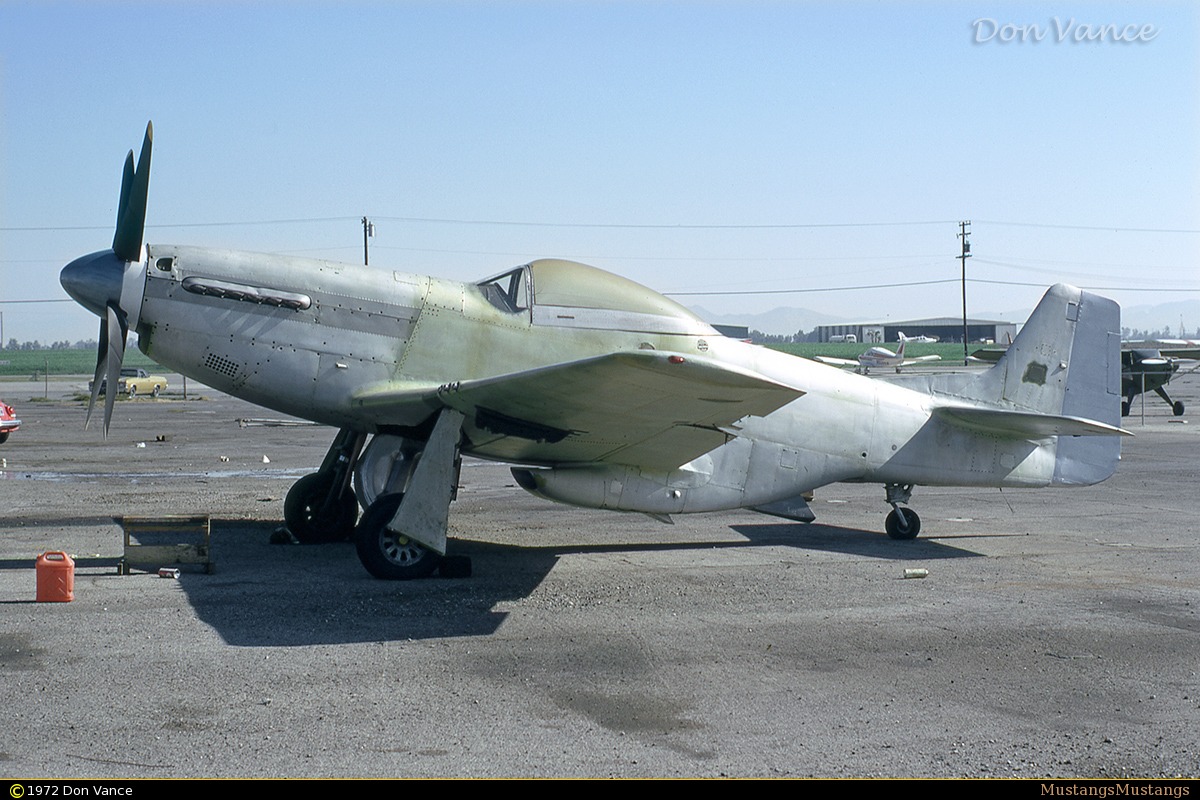 << Case # 409
Who?   Case # 410
Case # 411 >>
P-51 Who? Viewer Responses
William Yoak
I think this is one of several Mustangs which were acquired by Richard Vartanian during the mid 1960's. This was probably Serial #:44-74978, which was acquired by Wally McDonnell of Mojave, CA and then destroyed in a hangar fire at Shafter, CA.
William Yoak
Thank you for the tribute on this website to my father following his passing . The picture of him with the Quicksilver Mustang and the comments are much appreciated.
John Kerr
Going out of the limb a little on this one. Believe this to be N7711C, 44-72936. Photo possible taken at Van Nuys Airport, Ca.
Curtis Fowles
No joy on the responses so far. William: He earned the praise and will be missed.
Curtis Fowles
Hint: while not easy, there are enough features in this photo to match existing survivors photos - check the details - good luck!
Davis
Looks similar to the one that sit in San Jose, now named "Dixie Boy", N5444V??
John Dienst
Considering the unusual shade of blue on the aircraft's spinner and rudder, as well as the time period, I'd say that the Mustang is the late Mr. John Sanberg's N100DD 44-74923. Also, the photo was probably taken at Chino, California, outside of Fighter Rebuilder's facilty.
William Yoak
My next "guess" is that this Mustang is the late Elmer Ward's Man o'war shortly after it was acquired from Universal Studios by Ascher Ward (no relation).Elmer purchased it from Ascher in about '74 or '75 when it was named: "Poontang".It was based at Vannuys during the early 1970's while it was under Ascher's ownership, undergoing the early stages of returning it to airworthy status . Elmer moved it to chino around 1975 where it went through a series of "improvements" before being painted in the well known Man o'war scheme.
nev dalton
could this be tiger destefanis mangia pane around bakersfield.
thanks
nev
Curtis Fowles
Good guesses, but still no joy.
John Dienst did get the location correct.
T J Johansen
Have looked, and looked, and looked again, but find this one somewhat tricky. My Guess would be that it is Joe Banducci/ Elmer Rossi's CA-18 A68-198 possibly regd. N4674V at this time.
nev dalton
could this be 4463810 when owned by robin collard.rebuilt chino
early 70s.
thanks
nev
nev dalton
could be 4511540 chino early 70s
thanks
nev
nev dalton
could this be ed maloneys 4511582 early 70s
still tryin.
thanks
nev
Curtis Fowles
Lots of guesses flying around. One of them is correct, but I don't want to give in just yet. Looking for more than 1 person to come up with the correct P-51.
Tim O'Brien
'Wild guess, but it looks to me to be one of the Homer Roundtree Mustangs acquired by Ted Contri. Perhaps 44-63542 N5450V in Marysville, CA?
Curtis Fowles
Good guesses, but still no joy.
Curtis Fowles
Last Hint: Keep it simple. It's closer to home than you think.
Bill Lamb
I believe this is Ed Maloney's 45-11582, probably being relieved of its Spam Can paint job.
Case Closed! 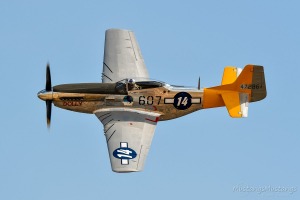