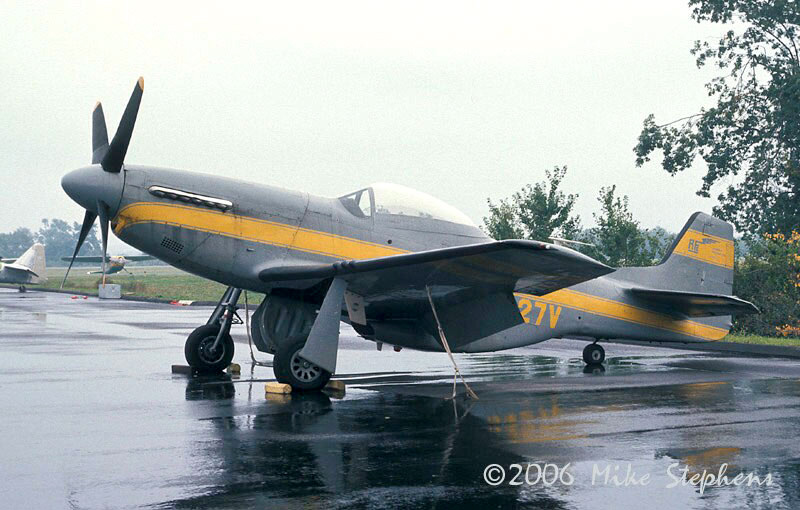 << Case # 373
Who?   Case # 374
Case # 375 >>
P-51 Who? Viewer Responses
T J Johansen
This is N5427V most likely shot while owned by Robert Fulton. There was a photo on www.airliners.net of the aircraft in what looks to be the same location, so I will venture a guess and say it's at Waterbury - Oxford near Oxford, CT.
Greg Kolasa
TJ, you're correct. In fact, I spent just this last weekend looking for a pic I thought I shot of this Mustang at Oxford years back. Good news: found the negative. Bad news: black and white, no date, but it is absolutely this 'Stang.

Larry Souza
That is the logo for Robert Fulton's company on the upper portion of the tail. He invented the "skyhook" pilot rescue device.

Larry Souza
J Albert Cook
The site may be Waterbury, but, could also be at Lockheed in Marietta Georgia. My father in law, Frank Gifford, actually co-developed the C130 pickup system in Mr Gifford's basement in Marietta. Being a Lockheed project engineer, he could gain nothing for claiming any credit. The winch in the system was the heart of the system. Mr Gifford told me that after they reached a design point in the project, Mr Fulton came back in only a few weeks with the completed winch. How on earth, Mr Gifford asked could you get gears cut in such a short time? Why reinvent the wheel, Mr Fulton answered, I just went down to the local International Tractor dealer and bought them off the shelf. Mr Fulton would buzz the Gifford home when he arrived at Marietta to let Frank know he was there. One of my wife's best memories is riding "on boards atop the batteries behind Mr Fulton in the P51. I myself was only lucky enough to speak with Mr Fulton once and briefly when my wife called him after Mr Gifford passed. He was a fine gentleman and great engineer.