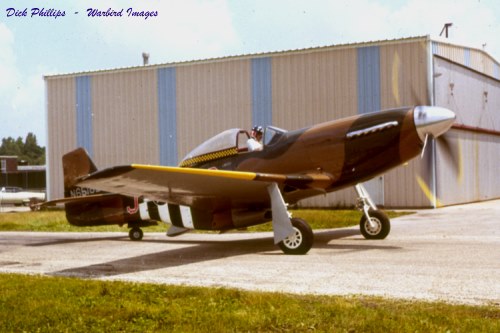 << Case # 335
Who?   Case # 336
Case # 337 >>
P-51 Who? Viewer Responses
Tom Huismann
Tom Kuchinski's P-51. Based at Timmerman Field in Milwaukee, Wisconsin. Tom unfortunately was killed in this airplane after entering a stall.
Martin / Swiss Mustangs
I concur with Tom see case #177 Martin
Steve Taylor
When I was a young boy growing up in Milwaukee,Wi Mitchell field was my back yard. I remember always watching a powder blue P-51 doing T & G'S,one day my older brother took me to the FBO and I was able to actually touch the plane. This was in the late sixties or early seventies.I also remember it getting a new paint job, does anybody know if this could be the same plane? Or does anybody have a picture of that powder blue mustang from Milwaukee. Thank you for any help.
T J Johansen
Hi Steve, The Mustang you are talking about is most likely Tom Kuchinsky's other 51, N6165U. Both Mustangs received the camo paint, but this one, N6518D had been white with a red cheat line previously! T J
Carol L Schmiddt
Today (04/18/2014) I found this site. I HAVE pictures of the T.J. "Tom" Kuchinsky plane. My late dad, A.L. Schmidt (Milwaukee, WI), a staff photographer for Kalmbach Publishing Co, a private pilot in the 1950's, and avid R/C model plane enthusiast, shot four (4) black & white photos of his plane at what appears to be Mitchell Field (Milw). I don't see a registration # on the plane. It just says "T.J. 'TOM' KUCHINSKY" below the canopy. I will USPS these to his family, if anyone knows of a mailing address.
Steve Taylor
Hi this is Steve from the post above, could you email those four photos
that you have, I sure would love to see them. Thank you. cpilot8@gmail.com
Case Closed! 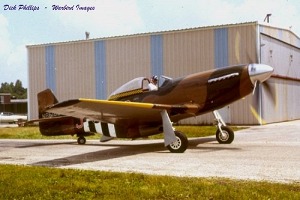