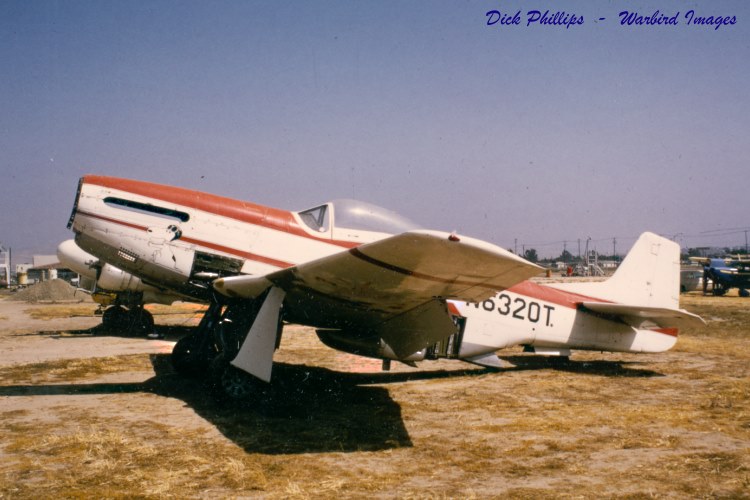 << Case # 326
Who?   Case # 327
Case # 328 >>
P-51 Who? Viewer Responses
mike miller
in august 1974 there was a p51d in carrollton, ga with this paint scheme owned by john steinmetz, i think, i'm not sure of the last name but that's close. it was for sale for 73,000.i was 18 at the time and clearly remember the color. i spoke with the owner at one time or another and he had just enough time for me, a teenage motorcycle rider, to tell me not to climb on his plane. and that it was a nineteen and forty four model. i know that's not much of a story, but it's what i remember the plane i saw that looked just like this one. one more detail or two, it had a buddy seat and it seems like the last digit of the registration number was R, instead of T. oh well, that's all. good luck.
Martin / Swiss Mustangs
This is 44-74497 - a P-51D-30-NA 1950: RCAF 9230 1958: N6320T(2) (James Defuria) 1960: (Aero Enterprises) 1962-79: (Ralph Rensink, Kenneth Neal, Glen Cook, Mike Smith, Junior Burchinall, Kent Jones, John Rutherford, Heritage Aircraft) "Vergeltungswaffe", "QI B" 1999: (Robert Jepson) full restoration 2002: restoration complete as "Little Witch" It flies as TF-51 in 353rd FG colors with Cavalier tail modification. Martin / Swiss Mustangs
Roger Baker
Martin's response is, as usual, correct and complete. The only thing I can add is that the photo was taken when the airplane was owned by Ken Neal. And was taken at Orange County, CA Airport. After the engine was replaced, Ken had a fuel system problem on the ferry flight back to his home in Oregon and bellied the airplane in up in the Mojave desert.
T J Johansen
Martin is spot on. Have seen a couple of photos of this plane minus engine before. To Mike, Didn't John Steinmetz own N5551D 44-73683 sometime in the 1970s? T J Johansen
mike miller
to TJ Johansen, after thinking about the color of John's P51, I now recollect it had more red on the bottom half, then a black stripe down the centerline and finally white from the exhaust and above to the tail fin. this was late 1973 on into summer of '74. I had a high school friend who worked at the carrollton, GA airport where this plane stayed locked away and out of sight from prying eyes and curious hands.However, I was fortunate enough to see it on the ramp once or twice. the last time I saw it , I was cutting a neighbors yard in august of 74 when the plane roared overhead. I shut the lawn mower off and hopped on my motorcycle and hightailed it 15 miles to the airport to catch another glimpse of this amazing bird. when I arrived at the airport I was lucky to find both plane and owner there at the same time. it was on that day I managed at least touch the plane that captured my attention for so many months. that was when I was asked not to climb up on it! I don't guess you needed all that but it just goes to show you how important these P51's are to leave such a lasting impression 30 years later.I wish I had taken a picture. I still think it was an"R" but it has been a long time. Oh, I didn't go back to finish the lawn I was mowing either. that's all.
Tom/Zac Tummers
As of 1998 P-51 6320t serial #44-74497 owned by lady alice corporation of wilmington delaware
Dick Phillips
Lady Alice Corp. is Bob Jepson.
John E. Rensink
This is a photo of one of two mustangs that my father bought shortly after they were retired from the R.C.A.F in the early sixties. The other was N6313T, now 'American Beauty', residing here in the northwest. At the time my father owned N6320T, the plane was kept at La Grande, Or. and Lewiston, Id. My father was a fire bomber pilot (B-25, B-26, B-17, F7F)and the plane was often kept at the fire bomber base at which he was assigned. He was also the one who originally put the red and white paint scheme on the plane that you see in the photo. As many of you may know, the plane has been recently beautifully restored as 'Little Witch'. Thank you for posting the very interesting photo. 'Long live 6320Tango'
PAtrICK M. BARRETT
A COMMENT ABOUT "thE OthER MUSTANG"MENTIONED BY MR. RENSINK, N6313T. thIS PLANE FLEW INTO YAKIMA, WASHINGTON IN 1962. IT CAME IN LOOKING LIKE A leftOVER FROM thE KOREAN WAR-thE U.S. REGIStrATION WAS SLOPPILY APPLIED WIth thE BLACK PAINT USED RUNNING DOWN thE SIDE OF thE FUSELAGE. I thOUGHT IT WAS BEAUTIFUL!! FOR A 14 YEAR OLD KID IN LOVE WIth WW2 PLANES IN thE 1960S I thOUGHT I HAD DIED AND GONE TO HEAVEN! I thINK I GOT TWO ROLLS OF B/W PHOTOS OF IT. thE GUYS AT NORthWEST AIRPOWER WERE SO HO-HUM ABOUT IT thEY DIDN'T MIND thIS KID CRAWLING ALL OVER thE PLANE WIth HIS BROWNIE CAMERA. thE REBUILD/RESTORATION TOOK ABOUT TWO YEARS AND WHEN IT WAS DONE "13 TANGO" WAS A TWO-SEATER IN (MOSTLY) WHITE WIth RED AND BLUE trIM.I JUST RECENTLY WAS LOOKING thROUGH MY PHOTO ALBUM, AND WONDERED WHAT HAPPENED TO thAT MUSTANG. NOW I KNOW...-PAtrICK M. BARRETT
John E. Rensink
Go see 6313t in Olympia Wa. Lots of history from Canada and beyond.
If you have any photos of 6313t or 6320t please e-mail them to rensinkjohn@gmail.com. Thank you Pat Barrett.
Michael Elkins
The Little Witch flies out of Stallion 51 ( www.stallion51.com )in Kissimmee, Florida. She's dual control and you can enjoy the most incredible experience taking the stick yourself. I did in November of 2011 and would highly recommend the experience to anyone with the desire to fly a P-51.
Case Closed!