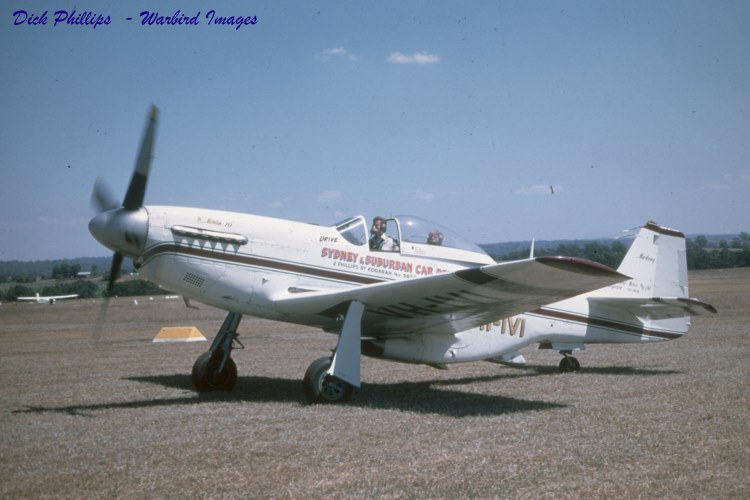 << Case # 278
Who?   Case # 279
Case # 280 >>
P-51 Who? Viewer Responses
Ron Dredge
VH-IVI ex RAAF serial No. A68-119 a CAC built Mk 21 aircraft photographed at camden airshow N.S.W. Australia October 1971. Owned and operated by R.J Whitbread from 1970 the aircraft was used for business and pleasure.Unfortunately on the 11/6/73 whilst flying over windsor N.S.W. the aircraft crashed killing Mr Whitbread and totally destroying the aircraft.
black
I knew RJ personally ...he had a smash repair shop at one end of the long Heathcote Road....and my brother and I had a smash shop at the other end..our two company tow trucks... were always arriving at the same car crashes..and we both flew from Bankstown..RJ's mustang was a simply beautiful restoration...sad to to see him go like that..I think he said he spent $70,000 to restore it..in about 1970ish...when you could buy a house for $15,000
black
I found this online....
.....I sold A68-119 to a Sydney businessman, Ray Whitbread. He flew her to Bankstown (Sydney) on 1 September 1970 where she was extensively overhauled and repainted. On 11 June 1973 he was
killed in her in a crash near Windsor NSW when, according to the Aviation Safety Network of the Flight Safety Foundation,2
the canopy detached and struck him in the head. My recollection is
different. I believe Ray was practising aerobatics for an air show at 8,000 feet doing vertical eight point upward rolls until the aircraft stalls. At that point the control surfaces must be centred or the
aircraft will fall inverted, which requires 17,000 feet to recover from. Ray had undone his seat belts and jettisoned the canopy to bale out but did not have time. The canopy was the largest piece to
survive the accident and is still in existence.
Langdon Badger
Mike Milln
July 2016
black
Heres a more complete story and many more pictures of RJ's plane
....Black

https://jimsaerophotos.wordpress.com/2012/06/26/mustang-vh-ivi/
black
and more...
RJ was well known and quite famous..

http://www.warbirdregistry.org/p51registry/ca18-a68119.html
Paul MacRae
On the day of the accident I was on the side of the road watching the Mustang doing aerobatics, I was very close as I watched it dive vertically into the ground. I was the first on the seine and I remember that the crash site was an almost circular disruption of the soil as if it had been ploughed , there was no sign of the aircraft at all it was all underground the only part was the canopy some distance away. To this day it still haunts me.
Robert Hawkins
I was a Police Officer at Windsor on that day. I was watching the aerobatics of this plane from the front steps of the PS, my boss, the Sergeant on the shift was an Ex-RAAF officer and later joined the NSW Police. The plane was very noisy and we could hear it about 2.0 miles away. I heard it going into another dive, then silence. I said to the Sgt, I can't hear the plane and as soon as I said it, the phone rang and informed me of the situation. We drove to the location and arrived about 6-7 mins after the accident. At the scene was a large hole with small bits of metal scattered around the inside of the crater. My boss told me to go into the hole and try and find fuel tanks intact, which was negative. I did find human remains which I will not describe on here. We stayed at the site till the Aviation authorities arrived and we returned to the PS.
Rod
I was a 10 year old on the day. I was with my family in Windsor about to head into a Chinese restaurant for lunch. We stood out the front for a moment watching this aircraft high in the sky. After a while when we were seated inside we heard an almighty loud scream of an engine revving, then silence. Not knowing what the noise was we carried on only to find out that night back home on the news, the plane had crashed.
Dennis Kinealy
Ray gave me an apprenticeship at RJ Whitbread smash repair in Kogarah and l was lucky enough to do the paint work on his P51 , l never got a ride in it but l did get to go with Ray when he did circuits in a wariway ?? he owned and would practice the landing of the Mustang . Ray Whitbread was one of the most gracious men l have known and gave me a good start in a career that has been good to me.
Case Closed! 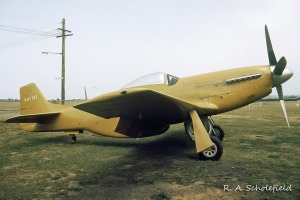