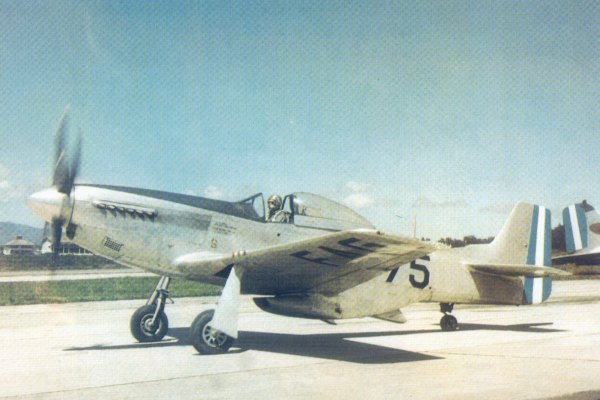 Joe Scheil:
Fuerza Aerea Guatemalteca 375 is Mustang 44-74854 and was RCAF 9272. Her US reg prior to going south was N9147R. I don't think she survived Guatamalan service. Note the fixed tailwheel common to all FAG aircraft...
Tulio Soto
Case #217 is a Guatemalan Air Force Mustang. Although I have the photo in my collection, it is an original Fuerza Aerea Guatemalteca'sphoto.It was shot in front of the Guatemalan AF's HQ, on the main apron, BaseAerea La Aurora, some time during the late 1960s, before the Mustangswere given the camouflage scheme.
Mario Overall
Hello,This particular photo comes from the Guatemalan Air Force archives and was published for the first time on the GAF's 75th anniversary calendar, which was sold during the airshow that year.It shows FAG-375 (Ex 44-74854) sporting the GAF's late 50s or early-60scolor scheme, which only included the blue-white-blue rudder and the large serial on the fuselage.By the way, if you check carefully the rudder of the C-47 behind this Stang,you will notice something funny: the photo was tweaked!!! Yes, in the original photo, you can clearly see that the C-47 belongs to the USAF, but the guys who put up the calendar air-brushed it to make it appear 'Guatemalan'. Note the dark color at the top of the Vertical Stabilizer and the lack of any GAF serial number on the tail.Very nice photo indeed...Cheers !Mario Overall, LAAHS Guatemala
Case Closed! 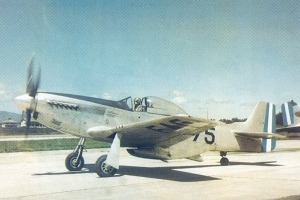