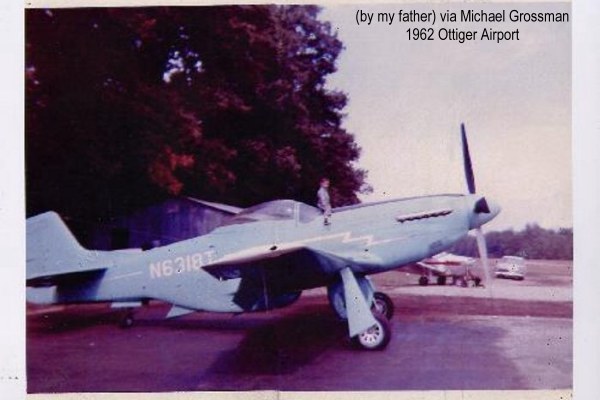 << Case # 164
Who?   Case # 165
Case # 166 >>
P-51 Who? Viewer Responses
Dick Phillips
Boy, am I glad to see this one. It is N6318T 44-74602. I have never seen a photo of this plane with any paint on it. I have some taken at Dunlap, Indiana in 1961 in bare metal.
Joseph Scheil
44-74602, RCAF 9255 surplused to Intercontinental Airways, all the RCAF Mustangs that went this route had similar N numbers. After Aero Enterprises in Indiana and Robert King in South Bend, she became N35N Race # 3 "Mr Choppers" with Crosby in Bellingham WA. Now flying as HM-P with Jack Hovey she is in a very pretty RAF scheme that is my screensaver....
William Yoak
The paint scheme on this Mustang as depicted in the 1962 photo looks very similar to the one that was flown by C.E. Crosby in the 1964 Harolds Club Transcontinental Trophy Dash immediately prior to the National Championship Air Races at Reno during the same year. Crosby was initially supposed to have entered that aircraft in the races at Reno as well, but later withdrew from any further competition during 1964 and every event subsequent to ' 64 .

The N6318T represented in this photo differs from the registration number used by Crosby in '64 which was N35N. Also, Crosby had Race # 3 in on the front portion of the tail cone and the race name: "Mr. Choppers" above the exhaust stacks on both the right and left top cowling pieces. My guess is that Crosby purchased the aircraft between the time this photo was taken and 1964, or he at least had the registration number changed prior to or during the time the race markings were added.

The bluish-green base color of the Mustang plus the white lightening bolts and white wing tips are what lead me to believe this is the same aircraft. However, there was more than one P-51 during the early 60's which had an identical appearing lightning bolt pattern . This was N335J which was owned by the late E.D Wiener and entered at Reno by him during the same time frame. Weiner's aircraft had bronze for a base color, though. So, I am fairly certain that this was not Weiner's aircraft.

Crosby's and Weiner's serial numbers were interestingly similar in that they were N335J and N35N (considering the "35-portions" of each number.) But, both of Weiner's Mustangs were similar too with respect to N-numbers (N335 and N335J).Weiner probably personalized those numbers and had them similar by choice. Crosby's similarity (N35N) must have been a coincidence. The most logical conclusion seems to be that Case #165 was the same aircraft that Crosby flew in 1964.
MustangsMustangs
Well Done!
ralph peterson
Steve Crosby had based the P-51 at Bellingham, wa. He had traded a Grumman Duck for the Mustang. Steve was the 3rd place winner of the 1964 Harold's Club Transcontinental Race in 1964. He felt that he did not have the experience needed to pylon race and stood down. as a side note the Grumman Duck ended up with Frank Tallman and Steve and Frank had a nice chat about the Duck and its movie history including being the star in "Murphy's War". Mr.Tallman had brought the B-25 "THE SMASHER" up to Bellingham in 1972 to film the mountains for the remake of "LOST HORIZONS". as a note, N35N was painted a sharp gloss black with red spinner and wing tips, pilots name and red tip of vertical stab. The a/c also had silver prop blades and white wall tires. the only speed mod for 1964 were the spiral jello molds to cover the gun ports.
Lon Moer
ralph peterson - Thank You!
I crewed on this Mustang for Bob Love in the years just after Jack Hovey had it painted as the Mustang MkIV.
Before that, when it was black, it was known as the "Jello Mold Special" but back then nobody could tell when the Jello molds were installed.
Case Closed! 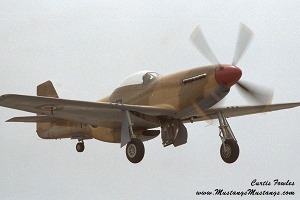