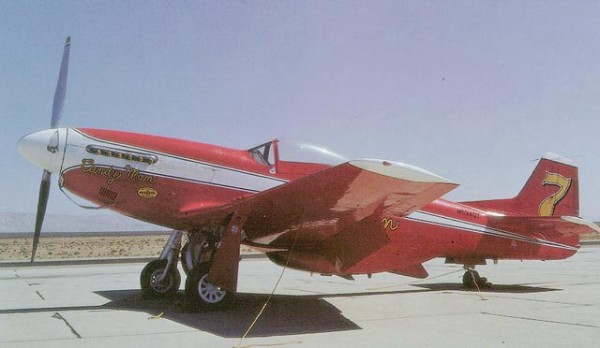 << Case # 125
Who?   Case # 126
Case # 127 >>
P-51 Who? Viewer Responses
Dick Phillips
This is N6340T 44-73149, which became N51JJ, then G-BTCD.
Martin Kyburz
This is a famous ship, being the first to appear regularly on airshows across Europe. Originally 44-73149, believed to have served with the 357th FG 8th USAAF ETO but returned to the US during fall 1945 and assigned to the Training Command, this ship was taken on charge by the RCAF 06.47 as part of the first batch of Mustangs delivered to the RCAF. It was one of 15 unique RCAF Mustangs that were not posted to regular Auxiliary units. It was also one of 15 Mustangs that were flown to the Canberry, Manitoba Air Station for storage prior to sale. The a/c was sold on February 25th, 1957 to James H. Defuria and Fred J. Ritts of Syracuse, New York, being registered N6340T.

The aircraft subsequently was transported to Elkhart, Indiana, for Aero Enterprises. 1962 restoration by Aerosport at Chino, CA for Ernest Beehler. 1974 Racer #7 "Candyman" red with white stripping - as seen in the picture above. 1980 Overhaul in Oakland CA prior to ferry flight to Geneva, Switzerland by John Crocker. 1981 colours of the 357th FG with nicknames "Moose" & "Candyman" applied in UK and stationed at Duxford as part of The Fighter Collection; registered N51JJ in May 1986. In 1991 the a/c was registered to G-BTCD. In 1999 the aircraft was purchased by Mark Hanna and received a new paint job (361st FG).
Joseph Scheil
The Fighter Collection's Moose/Candyman photographed in Mojave judging from the background. N6340T, ex RCAF 9568 currently reg as G-BTCD.
Glenn Bloom
The Candy Man was flown in the Mojave races by Jim Modes and Charlie Beck. Co-owners of the airplane and both T-6 pilots out of Van Nuys CA. The location is Mojave. Look at that ramp...the mountains behind...and the scrub brush. I would know that ramp anywhere.
Bill Eaton
Photo location is Mojave, probably the '74 or '75 race--no doubt about it.
Case Closed! 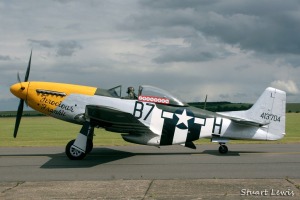