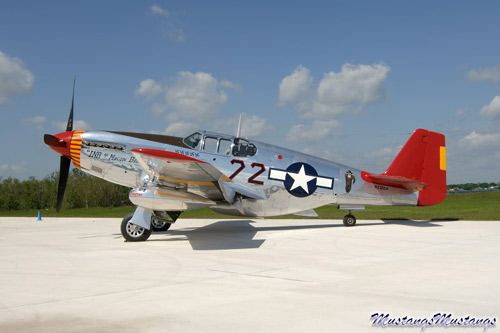 In late 1942, the Brittish and the U.S. sucessfully tested the Rolls Royce Merlin V-12 installed in a P-51 (NA-91). The NAA production plant at Inglewood, Ca would be at full capacity building the new P-51B. NAA decided to expand their plant in Dallas, Tx to build more P-51Bs. The B models built in Dallas, were re-designated P-51C.

The P-51C suffered the same problems as the P-51B with gun jamming and poor visibility to the rear. As with the B model, these problems were fixed at the factory and in the field.

Deliveres began in August 1943, later than the B model. The P-51C had to wait until the Dallas plant was ready for production.

Specification for the P-51C were identical to the P-51B.