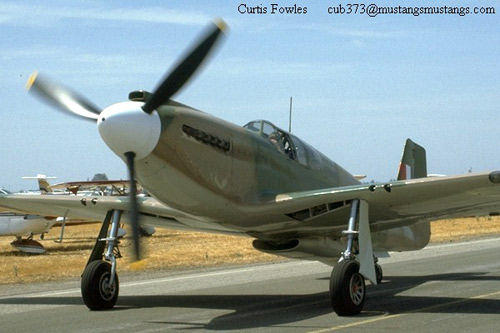 Designated NA-99, the P-51A Mustang was ordered in numbers of 1,200 by the U.S. Army in August 1942. No ground attack here, no dive brakes, just pure fighter. This was the best fighter the U.S. had below 22,000 feet. This according to the AAF School of Applied Tactics at Orlando, FL.

First flights were in February 1943 and deliveries began in March. The Mustang was delivered to the AAF in olive drab on top and a grey on bottom.

The P-51A served mainly as a fighter and escort in the China/Burma/India theatre (CBI). Modified versions called the F-6B, were fitted with camera equipment for recon and served in the ETO. The P-51A would see service into 1945, long after replacement models were in service. Production would be cut far short of the 1,200 ordered. As soon as the Rolls Royce Merlin modifications to the P-51 were deemed worthy, production was shifted to the new models. In all, 310 P-51As were produced by NAA.