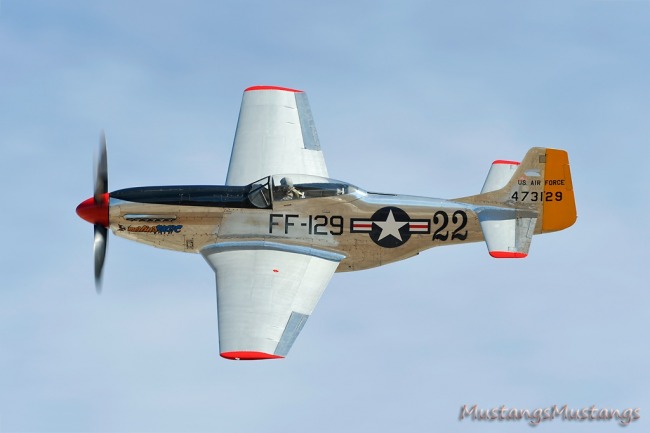 2006: Monday during qualifying, the race motor gave up under moderate race power. Crew worked hard to get a stocker in. They qualified on Wed, last chance qualifier, in the middle of the pack. On Saturday, high pressure O2 was put in a low pressure bottle in the rear fuselage and it exploded! Damage is major as skins blew off, cable were broken, the tank was flattened and blown apart. Witness's said "it was like a bomb". Luckily, nobody was seriously hurt. Merlins Magic was broke down and put on a truck for a trip home and a rebuild. Good Luck to the crew of Merlins Magic! We hope to see her back in the skies as soon as possible.

2006: December - Merlin's Magic is airworthy once more! Gerry Beck's shop and the crew of Merlin's Magic with help from Jim Martinelli did a super job getting the repairs done so quickly.
2010: Stu Eberhardt is unlimited check pilot and looking very good chasing students around the course. If you want to race unlimiteds at Reno, you must pass through Stu. Eberhardt is fair and by the book.
2012: Stu Eberhardt is retiring Air Racing! 2011 was the end of many things at Reno. Merlins Magic and the Eberhardts are part of the Reno Air Races. You could always see the Race 22 flag flying in their favorite pit spot. The Eberhardts and the Merlins Magic crew have been extremely hospitable to me and I would like to thank them for all the great memories.