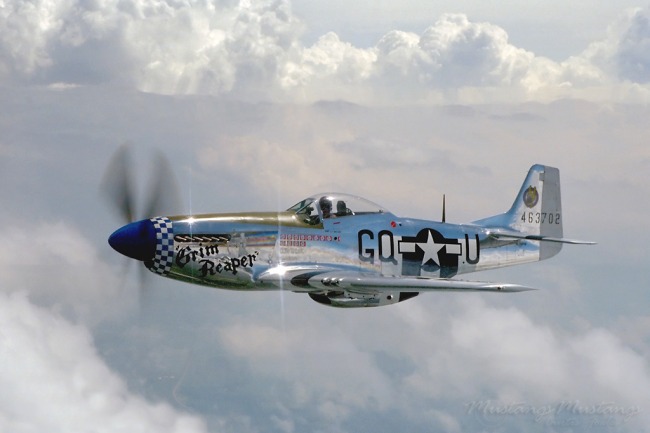 2000: Finished, days before Oshkosh airshow
Col. Brueland was present for pictures, stories, autographs
2000: September - Col. Brueland was present at Reno for a 354th FG reunion and was able to come to the Reno Air Races on one of the days. He stopped by the P-51 and signed many photographs that were given out to wanting spectators. Again he was very helpful and a delight to be around.
2005: seen at a few airshows on the west coast, still a crowd favorite
2007: raced as stocker at Reno in September. Curt Brown was the pilot. This P-51 missed the GML in Ohio because of a rough running Merlin just weeks before the trip.
2008: Aug - Col Brueland and some of the remaining members of the 354th Fighter Group met in Hollister for a great day. Several P-51s were present as well as a P-40 to say thanks to these veterans.
2010: raced as stocker with Dan Martin at the stick. Ended the week in the Silver!
2012: Jul 02, Col. Brueland passed away - We are losing our greatest generation. It is now 67 years since the end of WWII. Not many of our beloved Legends left. If you meet one, shake their hand and tell him how much we appreciate their sacrifices during and after the war.
2015: Reno Air Races - Sal Rubino and Dan Martin share flying duties. Sal Rubino is Silver Champion! Congrats Sal!
84 Images of   44-63701   N26PW   "Grim Reaper" on file
Images of   44-63701