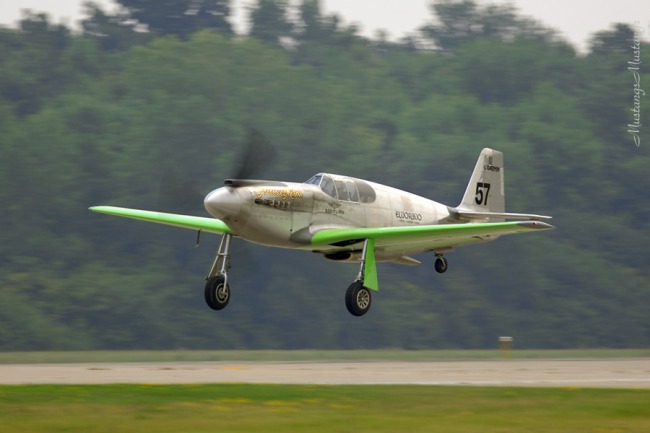 2001: new airframe awaiting buyer/restoration
2004: restoration work progressing very well, hoping for Oshkosh 2005
2005: not at Oshkosh Airventure, still in restoration
2006: Mar 31, N8082U, Gerald S Beck, Wahpeton ND
2006: May, completed, flown to Reno in June for work in movie "Thunder Over Reno", painted up as "Precious Metal II".
2007: Gerry Beck has accomplished much with this scratch built P-51A. He has parts together for several more.
2007: July 27, airshow, EAA Airventure Oshkosh Wisconsin
------------------------
Beck is flying his P-51A in the showcase flights each day. He and several other warbirds perform a mock air race for the fans. It is fun to watch as they go around to the right, instead of the left like at Reno.

After performing on Friday, Gerry collided with Casey Odegaard, Bob's son, who was flying "Stang", Odegaard's P-51D really named "Dazzling Donna". Just before touchdown on runway 36 his P-51 propeller struck the tail of the P-51D. In the process of evasive maneuvers, Beck's P-51A became inverted and crashed on the side of the runway. Gerry Beck's dedication to warbirds and mustangs was known to thousands around the world. He will be sadly missed.