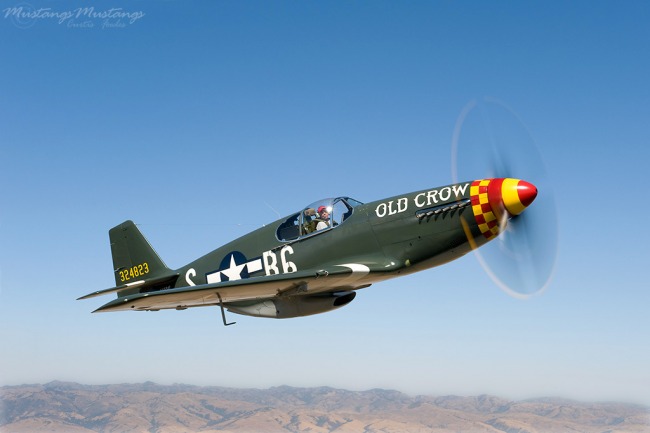 1944: This was the P-51B of 1st Lt. Dean Gilmore USAAF
1944: Nov 14, Crashed - pilot Dean R Gilmore killed - 3m SSE Claremont FL
During a low-level navigation training mission around Lake Louise in Florida, Lt. Gilmore struck the water and crashed. Close by fisherman located Gilmore and brought him ashore. He did not survive the crash.

2001: Low water levels in Lake Louise caused the discovery of the P-51B wreckage. After an investigation, the deceased airman's family was notified. There is a great story about it at Martin Kyburz's Mustang Site Swiss Mustangs. Link to Story

2002: Wreck purchased, Jack Roush, Livonia MI
2003: Jul 24, N551E, Jack Roush, Livonia MI
2004: Restoration at Art Teeters - Cal Pacific Airmotive in Salinas, Ca
2005: Fuselage work underway, Malcolm Hood in place, skins and tail mostly complete, engine is in, wings almost complete. Many details to work out.
2008: June 8, First flight in Salinas Ca, with Dan Martin as pilot. Minor squawks to work on. 2nd flight June 9. Dan flew her 4 times, then Jimmy Leeward did a few test flights.
This P-51B is truly beautiful to see. Look for her at EAA Oshkosh late July 2008.
2008: June 18, Jack Roush flew her for his first and second flights. Col. Bud Anderson was present to watch. Jack gave Art Teeters a big "thumbs up" after he landed his newest P-51. Col. Anderson was recently receiving a P-51 check-out back east.
2008: June 24, Jack Roush departed for Michigan from Salinas, Ca.
I would like to thank Art and his staff for very professional way they conduct themselves. Truly a classy group. Thanks also to Jack Roush who made this all possible and of course a big thank you to Col. Bud Anderson for his faithful service to our country. Also thanks to Col. Anderson and Jack Roush who took the time to sign a few of my air shots for me and Dan Martin. They will look great on the office and hangar walls.
38 Images of   43-12252   N551E   "Old Crow" on file
Images of   43-12252