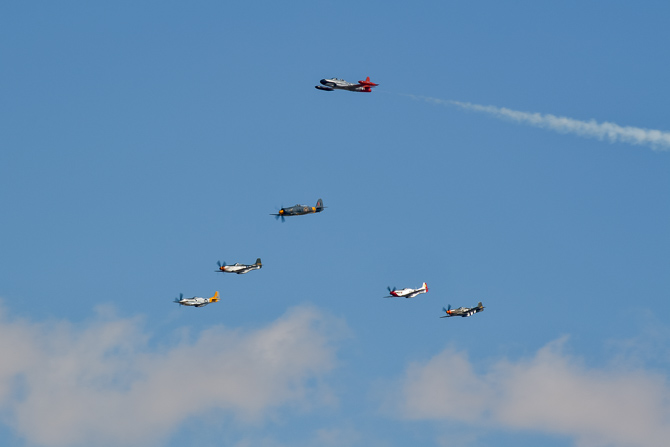 The unlimiteds. Heavy metal, heavy iron. Whatever acronym you like, use it, because they are worthy. That sound, oh that sound. No where will you be able to hear that sound of 75 year old warbirds pointing the nose down and reaching 500 mph!

Even the bronze race which only produces speed in low/mid 300's is fun to watch and hear. This year there were heat races with a P-51, P-40, Wildcat, Corsair, Yak, and Spitfire. You just can't find that anywhere but at the Reno Air Races.

The talk of the races, other than Strega or Voodoo was the restoration of the former P-51A/D Polar Bear. John Dowd purchased the Allison powered mustang from Jerry Gabe back in 2012. He hired John Muszala of Pacific Fighters in Idaho Falls, ID to restore the part A model, part D model back to factory A model specs. Even better, they went so far as to restore 43-6006 to look like an XP-51. It is stunning! John Muszala II, Little John, was a key player in the restoration and was chosen as the race pilot. He never stopped smiling the whole week as "Shanty Irish" performed very well under his control. Congrats to the Muszala's!

Oh my, what a gold final it was. John Consalvi in Strega has the pole, Steven Hinton in Voodoo is in 2nd position - not a familiar spot for the young air race veteran. At the start, Voodoo leaped out and took the lead by pylon 4/5. It's like he had inside info about the start ;) Hinton is flying a very steady line while Jay Consalvi in Strega looks like he was struggling to keep that rocket ship on line.

Hinton pulls a little adding a very small cushion - not enough to absorb a pylon cut penalty. In no time at all they are coming into lapped racers. Per the rules, the faster racers are to pass on the outside and higher of the slower racers. Steven Hinton is doing just that with Strega hot in pursuit. Nearing the end of the race Hinton comes up on more lapped racers and is forced to take a wide line around pylon 1 and 2. Consalvi decides to cut to the high inside line and powers by the lappers and Hinton. His pass holds and Strega wins one the most exciting races ever.