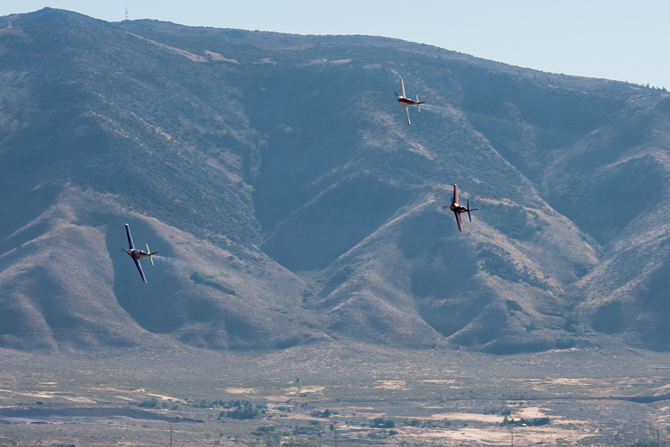 The Big Guns of The worlds fastest motor sport. The Unlimited Gold Racers

The unlimited excitement was a P-51 head to head match of Strega vs Voodoo. Voodoo is the returning champ with mega-wins Steven Hinton as pilot. Piloting the Witch this year was a crowd favorite Robert "Hoot" Gibson - former space shuttle astronaut and veteran unlimited gold race pilot flying several Sea Furies, but never in a P-51. In fact word is he had never flown a P-51 ... hmm. This P-51 duel would play well for Stewart Dawson in Rare Bear.

Rod Lewis's team have suffered through many disappointing years, and many had their doubts. But, you can never count the Bear out! That Bearcat has won many times before and will chase you down and beat you when you least expect it.

Friday: What a sight to see! Rare Bear, Strega and Voodoo all battling for position as they come across home pylon after the pace lap. All finish strong and healthy - Rare Bear in 1st, Strega 2nd and Voodoo 3rd. Dreadnought and Sawbones are a distant 4th and 5th.

Saturday: Again Rare Bear, Strega and Voodoo all battling for position as they come down the chute and right over the top of us at Pylon 2. This time it is different - no parade laps - the top three are gunning for tomorrow's pole. What a sound! Steven Hinton shows that Voodoo can pass quickly. Voodoo bolts to the front by the time they pass pylon 5. Strega passes Rare Bear and closes on Hinton in Voodoo - looks like they powered back a bit. Hoot passes Hinton and is now in 1st position. Rare Bear almost catches Voodoo but finishes in 3rd. Speeds are up: Strega - 484, Voodo - 475, Rare Bear - 474. A very exciting race to watch - but it comes with some engine carnage.

Strega blow a big hole in a stack on the right side destroying the exhaust shroud. They checked it out, said it was no biggy. Voodoo was blowing blackish smoke (especially coming down the chute) on both days so far. They were looking at oil coming out the bottom of the merlin - no word was given but they looked concerned. Rare Bear looked and sounded great throughout the race. They look ready for Sunday's final. Dreadnought and Sawbones finished 4th and 5th.

Here they come down the chute on Sunday - the Unlimited Gold Final.

Voodoo is still showing black smoke, Hoot in Strega is powering up taking a nice "Hoot" line. Rare Bear or Voodoo will have a hard time passing. Rare Bear gains ground on Voodoo as each lap is in the books, Strega is out front running strong. Passing Pylon 1 on lap 7, Steven Hinton in Voodoo calls a mayday and pulls off the course. Hinton lands safely on runway 14. Strega wins, Rare Bear takes 2nd and Dreadnought logs another 3rd place finish.


Congrats to Hoot Gibson, Tiger Destefani, LD Hughes and crew for a super performance this week at the 52nd National Championship Air Races in Reno NV.