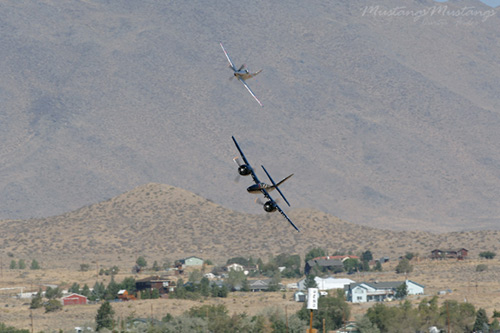 Future of the Racing Merlin?
story and photos by Curtis Fowles

The last year a Merlin powered racer, namely a P-51, won at Reno was 2003. But remember in 2004, Skip Holm was ahead and had the fastest racer, but a pylon cut and smart flying by John Penney gave the Gold to Rare Bear.

In the last couple years there has been much talk about whether or not an inline V-12 Merlin will rise to the podium once again. The last four years have been won by radials. Rare Bear has won at Reno eight times since 1980. The wins have come mainly in streaks. The Mustangs dominated the trophy from 1992 to 2003 eleven out of twelve races with Strega and Dago Red. Rare Bear won four straight starting in 1988 and now has won three out of the last four.

The Mustang crews have struggled over the past several years with multiple failures. By Sunday the last several years, there has only been a handful of P-51s in the field and worse yet, none have finished the Gold race since 2004.

Last year, 2007, Bob Button in #5 Voodoo, started the race but pulled out and dnf. In 2006, two mustangs started but Jimmy Leeward in Cloud Dancer called a mayday before all the racers joined up. That left Strega to fight off all the radials, but he broke and dnf on lap 5. Now in 2005 we watched Dan Martin raise many eyebrows with his Ridge Runner and a Sparrow V-12. He pushed from 3rd to 2nd with ease and was tracking down Rare Bear when everything blew and sent Dan to a dead-stick landing. 2004, that was the last year a Mustang started and finished the Gold race. In fact, four started and three finished.

V-12 guru Dwight Thorn of Mystery Aire built the last winning V-12 at Reno. He has built winning V-12s for both Dago Red and Strega. With his retirement a few years back, a question arises: when will a P-51 win Gold again and what (who's) engine will be in it. Remember, race merlins, don't last very long. I know that's not very comforting to know if you are the guy signing checks. This is not a toaster with a 5-year warranty. That check to the engine guy is buying a race merlin that took many months of careful craftsmanship to construct and will hopefully last a week of air racing!

Merlin engine builders take a stock merlin and more than double the boost (manifold pressure) and raise the rpms by almost 20 percent and produce a monster V-12 that in many regards is a time bomb when pushed to the outer limits. I've heard many times in the pits, "it's not if it will break ... but when". To make matter's more difficult, the cooling and oil system on the P-51 have to be in perfect working condition to handle the increase in temps and pressures. Many race engines have blown because of system failures, not a failure of the engine parts. If the coolant system can't keep temps in the green or the oil system keep proper lube, it will not matter what kind of engine is up front.

Bill "Tiger" Destafani, pilot of #7 Strega has said more than once that he will win or break trying. He is certainly not the only pilot with such competiveness. ADI will be streaming and parts will be flying on any given race week at Reno. These guys are here to win. Mike Brown pushed September Fury to the limit in 2007 because giving everthing the aircraft has then breaking while trying to win is better than 2nd place. In 2005 Dan Martin saw an opportunity to get his stock (less a few bolt on parts) P-51 airframe in a position for a chance to win. He could have powered back and finished second, but ... no way. He took a shot, and broke.

And we have seen how catastrophic some of the failures can be. Remember last year for the Merlin's Magic crew? A blown piston/rod put a hole in the middle of the crankcase from side to side. Dago Red's race merlin in 2006 let loose because of a coolant check valve malfunction. The merlin overheated quickly and a hole was produced out the side of the crankcase. Sometimes the pilots and crew can detect a problem before it gets catastrophic. Leeward's mayday last year before the Gold race was caused by a header tank leak (coolant), not the merlin. He returned safely before the race started.

What about a simple engine cough or sputter? Used to happen in the cars we drove all the time. No big deal, let off, or pump the gas and you are going again ... easy. Well, because of the high pressures involved, a cough or sputter at high boost in a V-12 will usually send parts flying. I remember Brent Hisey in Miss America landing after a mayday with half the intake trunk hanging from the bottom and cowling parts spewed on the course after a "hiccup".

Teams want (need) their V-12s to last from testing to winning to getting back home. In 2006, Dago Red went through two race motors during the week and had to install a ferry motor to get home. Strega has also gone through two race engines in a week. Voodoo, Miss America and Ridge Runner III have installed ferry motors to get home after blowing up the race motor.

What does it take to get a V-12 back on top? Some say the radials are the way to go and that the inlines won't be able to do it again. What? It's not like radials never break is it? Remember 2006? Rare Bear blew a jug or two right in front of the pits on a qualifying lap. Last year, 2007, Mike Brown pushed everything to catch Rare Bear and blew his tested race engine. Yes I know that the radials have dominated the field during the Unlimited Gold race in the past few years, but ...

... radials do break. I will admit that radials have an advantage of reliability because the merlins are water cooled. Both types of engines are pushed to the edge and when doing so bad things can and do happen.

The P-51 and racing merlin have taken their lumps for a few years now, but the engine builders of today will do their part and a perfect blend of engine, airframe, crew chief, crew, owner and pilot will all come together ... just like they did in the past. They will work through the bumps and problems. P-51 race crews are not satisfied with the outcome of the past few years. They will not be idle. Come Sunday, they will find a way and get back to the top of unlimited air racing, just as they have before.