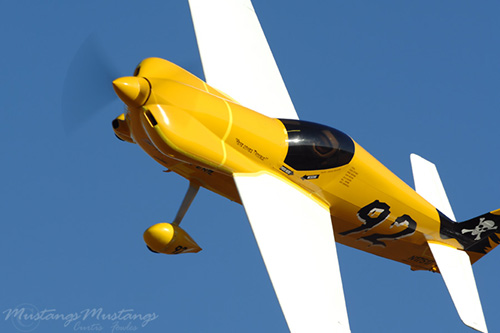 The Other Air Racing Classes
story and photos by Curtis Fowles

Everyone knows about the "big iron" at Reno, the unlimiteds, but did you know of the five classes that race each day?

Formula One class uses the inner course and shares that course with the biplanes. They fly early in the day when the wind is not high. There are some very colorful paint jobs in the field. With a pit pass you can get up close and check out the size of some of the cockpits. The fastest speeds are in the mid 200's and the prevailing aircraft is the Cassutt III M.

The Biplane class flies the same 3+ mile course as the F1 racers. The Pitts S2S is one of the most used racers. The F1 and Biplane classes are unique in that they do not start from the air. They start from the ground. When the wind blows from the west, the racers take off on runway 26 and have to go around the scatter pylon to get back on course. Very exciting to watch as the action is very close.

In both the biplane and formula one class, it is common to see someone get caught up in a wake and get rolled 30 degrees to one side in a split second. The pilots are well aware of this and ready to counter. A few years back there was a video of a biplane racer that was knocked inverted on the course at less than 100' agl. Superior flying skills from the pilot righted the aircraft safely and he kept on racing!

The T-6 class is one of the most competitive classes. The racers are all very closely matched in speed. During the first few laps of a heat race you will see many T-6 racers bunched up before they slowly spread out. The T-6s are fun to watch and noisy!

The Sport class has their own course, like the T-6s, and use the unlimited start procedure and course for the pace lap. Their speed vary greatly in qualifying from 220 to 386 mph! Top speeds this year belong to the Nemesis NXT. A very slick looking racer, they held first and second. One of the coolest looking and performing sports is the Thunder Mustang. With V-12 Falconer power, the Thunder Mustang was built to match the fun (without the costs) of the legendary P-51. John Parker and his "Blue Thunder" racer have been a fan favorite for several years. Parker has been the fastest racer during the week, but has had trouble in the past on the final day. This year they had big trouble before Reno. In a heartbreaking incident, Blue Thunder ran off the end of the runway at Reno and ignited the brush. Parker got out ok, but the racer burned. Parker and his team have already began the push to build a new and better Blue Thunder. Stay tuned.

The final "other" class is the jets. The first trial year of the jets was just for fun .. and it was. With Jimmy Leeward burning up the course with a Mig-17 with burner ablaze, it was a hot show. A few years later and L-39s have dominated the field. This year was different. L-39s were joined by an L-29, a T-33 and a very cool T-2 Buckeye. The T-2 was extremely fast, burning the course at over 500 mph during qualifying. The T-2 won on Sunday but the T-33 torched the qualifying field at 525 mph!

Let's be blunt. We come to Reno to see the unlimiteds. They are fast, they are old and they sound sooooo good. The "other" classes and the great airshow fill the voids during day. Right? But there's a lot more. Just as in the unlimited class, the other classes have their behind the scenes stories, their rivalries and their comraderies. They also have dedicated crews and pilots who are very serious and focused on air racing. Don't sell them short.

Just remember that when the T-6s start a race, it does not mean it is time to go get a couple slices of pepperoni pizza and a drink. Well ... maybe, but hurry back because you will miss some good racing.