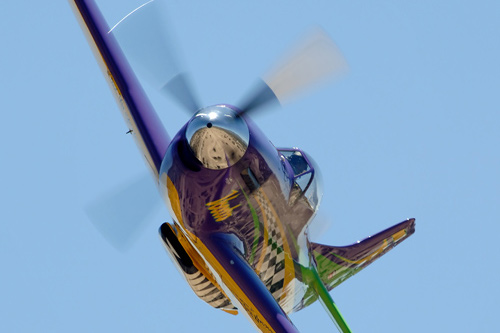 All right, the reason why we come to Reno in September, the Unlimited air racers. If you read the preview, you know the hype already so I'll skip that. What happened? That's what you want to know - so here goes.

Qualifying saw some maydays from two past champions with another past champion having trouble getting to top speed, leaving race fans concerned. What would Reno be like without Dago Red, Rare Bear and Strega? What about a fan favorite P-51 Merlin's Magic? They blew a merlin sky high on Monday, then hustled to get a stocker running by tuesday afternoon. They beat the gun and qualified on Wednesday, last day - nice work. As of Monday afternoon, Jimmy Leeward in Cloud Dancer is not on the ramp. Is he coming? We hope so. Michael Brown flew a very tight course and posted a 478 mph qualifying time. September Fury is running good.

Past champ Dago Red blew up their Mouse motor when an ADI check-valve failed on Tuesday, leaving lots of questions like "will they make it back in time?". They busted butt all night, like Merlin's Magic crew the night before, to get a spare race merlin in and running by Wednesday AM! A prop leak forced them out of qualifying - Uhhh. They could still race if a few other racers drop out - and they did. All this hard work, only to find too much metal in the screens of the 2nd merlin. Dago is out! Bob Button is using a full Sparrow Mouse Motor and posted a good Q time of 435 mph, good enough for 7th.

A fixture at the races, #11 Miss America, stood down this year. Had my first P-51 ride in her twenty plus years ago.

As of Wednesday morning, several key racers had not qualified yet, including Rare Bear, Strega, Spirit of Texas, Merlin's Magic and #57 Super Corsair. Cloud Dancer did show up late Monday and had qualified on Tuesday, but was out to bump up his time if possible - and they did. Rare Bear had problems all week keeping the big radial going, but they got into the air Wed. morning. They ran good but not great for the Bear qualifying at 455. As Ron Bucarelli came by pylon 9, the Bear popped, sputtered and pulled up in a mayday as he crossed the finish. They blew a jug and sent all the oil down the side of the Bear. Rare Bear would not return in 2006.

Strega took to the air and flew a high line and a speed of 442. Tiger Destefani and Team Stega have had a busy week chasing problems, trying to get Strega up to her norm of 490. Merlin's Magic did qualify with a stocker at 363.

Here are the Unlimited Qualifying results for 2006
unofficial

Michael Brown with his completely redone Sea Fury racer, September Fury, took the pole and never looked back. They posted an early fast time, but there was plenty of room for Strega, Rare Bear and Dago Red to move ahead of Brown. All of these three racers have posted speeds higher than Brown's in the past. But racing is racing and problems are too common. If you doubt that, go to the RARA website and do a search on a single racer. You will see all the years and the DNS and DNFs listed. Strega, Rare Bear and Dago Red fought through their share of problems, but only Strega would live to race on Sunday.

Bob Button in Voodoo posted a real nice time of 435, but on Friday he aborted take-off and then later we learned that the merlin was done for 2006. Too bad for Team Voodoo, they have had their share of setbacks over the years. Jimmy Leeward in Cloud Dancer had to call maydays in the Sunday Final and in the Friday heat race. But, on Satuday, Leeward ran strong with a win in the silver heat at 428 mph. That put him back in the Gold for Sunday.

The tigercat of Michael Brown ran consistant all week in the 360's. This was the first year of Odegaard's #57 Super Corsair running the course. He did not qualify but won heat 1C on Thursday at 357 mph, took 3rd on Friday 2C with 370 mph, then had problems on Saturday and did not start. On Sunday, Odegaard was moving up on Dave Morss in Polar Bear to steal the Bronze win, but no, he had to pull out and DNF. Dave Morss in Polar Bear ran smooth and consistent to win the Bronze on Sunday at 344 mph.

The Silver Final on Sunday had a great mix of aircraft types: 2 Sea Furies, 1 Bearcat, 1 Tigercat, 1 Yak and 4 P-51s. Starting on the pole was Dan Vance in Michael Brown's September Pops. Dan flew Pops to a win and the field finished as started. Pops moved up to the Gold Final.

Missing from all this excitement was long-time Air Race check pilot Art Vance. Vance was killed in October 2005 when the Hellcat he was flying crashed. Art's son Dan Vance flew his father's P-51, #31 Speedball Alice, in much the same way that Art used to. It must have been very emotional week for Dan. A very nice four ship P-51 missing man formation was flown in memory of Art Vance just before the Gold Final on Sunday. A fitting Tribute.

We've waited all week (year) for this moment. Pole has been owned by Michael Brown in his powerful Sea Fury September Fury. Six Sea Furies take on a Yak, a Bearcat and two Mustangs. The Mustangs start 8th and 9th - Tiger DNF on Saturday and Leeward moved up from a Silver win on Saturday. Before the racers get to their base leg of the start, #9 Cloud Dancer, Jimmy Leeward has to return with overheating problems. The header tank had a weld fail and sent coolant spewing. So, Leeward gets back safely after an anxious few miles of return base to final on Runway 08.

Coming down the shoot and given' the famous "Gentleman, you have a race" call from veteran pace pilot Steve Hinton, Tiger jumps on the throttle as he did on Saturday and launches past several racers and into third spot before half the pace lap was done. He is flying a high line and has Dreadnought in his sights. Brown is motoring fast and low and will be hard to catch. But Strega has won before and it is a fast aircraft. Tiger gets past Jackson in Dreadnought, but has to use precious time and mileage in doing so. Meanwhile Brown is pushing hard and still a few seconds ahead. Tiger tries to catch him and seems to gain some ground in the middle of the race.

What about the rest of the pack? Who cares, I'm watching first and second. Come on Tiger! Strega seems to hold position but Brown will not give in. That Sea Fury is running tight and hard. Tiger is running out of laps to catch up, but he keeps coming. Then on the final turn around pylon 2, where I was, Tiger's #7 Strega goes momentarily silent, then powers up as Tiger calls a mayday and is done.

Brown continues the final lap with ease and gets his first Unlimited Gold victory. The celebration kicks off quick as I hear a "YEE HAA" on the scanner as Brown pulls up for cool down. They are celebrating loud in the September Fury pits as the get ready to meet Brown on ramp. Tiger sets up and lands safely on runway 14.

Congrats to Michael Brown and crew!


So there you go, another year that a P-51 does not finish the Gold Final. Don't worry, the P-51 is the fastest racer out there and they will prove it again. As for Leeward and Destefani, they are great sportsman. Both were is high spirits at the end of the race week. I watched Tiger give out many autographs and talk to his fans - a class act. He was joking, smiling and laughing with everyone.