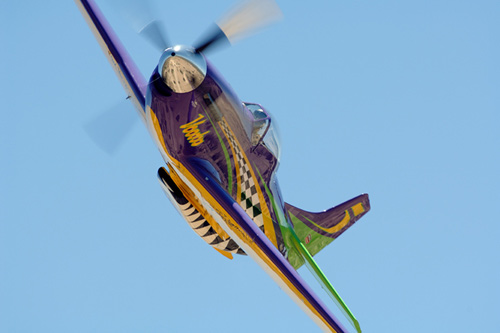 UPDATE August 26, 2006: A few weeks ago, it was looking very iffy for Jerry Gabe and Polar Bear. They had a big set back with some engine problems and the Allison had to be sent in for some repairs. The engine arrived back at Hollister last week and Jerry and crew put her back together again. After a few runs during the week, Dave Morss took Polar Bear up for a 45 min flight. Everything sounded very good and it looks like Polar Bear will be at Reno as planned.

Another P-51 has entered the races. Provenance Fighter Sales has entered their new TF-51 "Tempus Fugit" in the Reno Air Races with Dave Morss as pilot. Hmmm ... Dave is flying Polar Bear and the TF will certainly be in bronze with "P Bear". Well if they both qualify in Bronze, then someone else will most likely fly "Tempus Fugit".

Wow, where do I begin. This is being written in late July / early August. This year is going to be a year to remember. The unlimiteds are stacked! The three top winners in Reno Air Race history will be here. Strega, Rare Bear and the MustangsMustangs favorite, Dago Red. These three are multiple-year winners with more than one pilot.

So (you're thinking), it's a three-man race? Nope. Some of the regulars are stepping up their game. Michael Brown is showing up in a completely revamped full-race Sea Fury, "September Fury". Bob Button in his P-51 "Voodoo" will have an engine full of horses. Jimmy Leeward was working on the long-awaited return of the "Leeward Special", a.k.a. "Galloping Ghost", but now that looks doubtful. Brent Hisey in the flashy "Miss America" is always a threat winning the Silver and moving up to Gold.

But don't count Leeward out, rumor says that his other racer, #9 "Cloud Dancer", just might have some a few new goodies bolted on. Last year, Leeward cruised for a Bronze win on Sunday. This year, he won't be cruising. What about "the Buick", aka the Sanders Sea Fury "Dreadnought"? Well, Dreadnought will be there just waiting for those top guys to beat each other up and break so he can swoop in for the win. Other Sea Furies to watch is Stewart Dawson's "Spirit of Texas", Hoot Gibson's "Riff Raff". Last year, Sea Furies dominated the Gold in numbers, with only one Bearcat and one P-51 mixed in. This year will be better for the P-51.

Getting back to the top three. Looks like all three could have new pilots for 2006. This could mix things up completely. Oh, and Dago Red, has a new pilot, and also a new crew for 2006. Dan Martin, owner of "Ridge Runner III" the fastest "stocker" ever, has struck a deal with owner Terry Bland to fly the fastest unlimited racer on record at Reno. Dan has raised many eyebrows while pushing his Ridge Runner far beyond expectations.

Strega was listed with Curt Brown as pilot, but that fell through. Then rumors flew that Bill Rheinschild, or "Rhino", was flying Strega. Now the champion pilot/owner "Tiger" Destefani is listed as pilot. One problem is that Tiger has not raced in three or so years. Racers that have not flown in the last two years are supposed to got to PRS (rookie school) in June before the races and pass the course.

Tiger was not at PRS 2006. RARA would have to hold a special checkout session just for him. This is not a normal happening, so we will see. Rhino could still be the pilot or another (Skip Holm is not listed on any team? Hmmmm). Last year's winner (and 2004) was the Bearcat "Rare Bear". The Bear will also have a new pilot this year, Ron Buccarelli. Buccarelli also flies his highly modified racer "Precious Metal" which uses the powerful Rolls Royce Griffon engine with contra-rotating props. Buccarelli has never raced the Bearcat, but looked very good at PRS.

Bottom line is .... Who Knows! Do they take air racing bets at the sportsbooks in Reno? I would like to see the lines on this year's race.

We will probably have to wait until the weekend before the races to find out who is showing up and who is flying. Until then, speculation and rumors are flying fast and way low, so watch out.