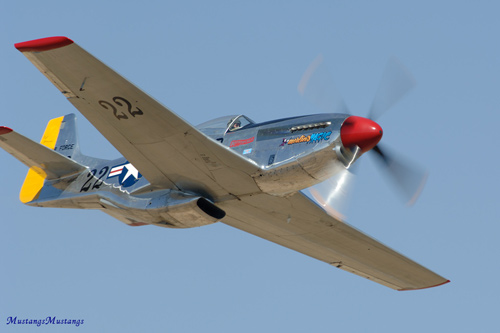 What a week for Stu Eberhardt and the Merlin's Magic crew. They had a Sparrow merlin installed back in January of 2006 and have been breaking her in. Everything has been working very well before Reno. Steve did the last bit of race prep in Hollister and they are ready to go.

They flew on Sunday during qualifying but did not clock, just cruising around. Monday they would up the power to 80-85 inches to check things out. Sounds good, Stu has a good line. Coming past pylon 6 (I was between 6 and 7) I heard a pop or cough, don't remember, but I lowered my camera for a sec. to see what was going on. Stu pulled off the course and flew just west of where I was. I took a few frames as he passed. A mayday was called as Stu turns airspeed into precious altitude and heads southeast towards 08.

No smoke as he passed, no oil down the side. As he gets closer to the approach end of 08, the smoke comes, that's bad. Then the smoke stops, that's worse - oil is gone. The merlin is still turning as Eberhardt takes a short approach to 08. He puts her down on the numbers and coasts to a stop. Oil is everywhere. The damage is big to the merlin. A rod gave up and punched a huge hole all around the case. You've seen the pics - ouch. Luckily, all the cowling parts stayed on. Nice flying by Stu Eberhardt.

So, the pizza is delivered, the crew is fired up and the fun begins. Someone will retrieve a stocker from Hollister while others begin the teardown. Umm ... first some clean-up. They work late and get the engine ready to pull. A crane shows up and they swap the bad for good. Merlin's Magic crew get everything going later the next day (Tuesday). They have a run-up, everything working good. Wednesday they go out for last chance qualifying and do very well for a stocker with a 363 mph lap. Great work guys. They are in.

Thursday they have to race finish in the middle at 355 mph. Friday, they are in heat 2C and bump up the speed to 370 mph with Bill Eberhardt flying this time. Everything is looking good to finish the week winning Bronze or in the Silver.

Then the unthinkable occurs. I was out at pylon 8 Saturday morning before the start of the sport class, really waiting for the unlimited heat 3C in which Merlin's Magic was paired. While standing around talking I heard a distinctive "boom". Hmmm, it was a bit louder than the normal backfire from that old firetruck that's been running up and down the line. I look over, but it's too far to see much on the ramp. It's about 10 am or so. My guess is that pylon 8 is about 3/4 mile away.

We did not know what was going on until one of the RARA crew told us that Merlin's Magic had an accident in the pits. Hmmm. We did hear a boom. Merlin's Magic was not in Heat 3C. Later that day, I was able to get by the Merlin's Magic pits and find out what happened.

One of the oxygen tanks on the right side of the rear fuselage blew up when it was being filled! Ryan let me take a closer look. The damage is tremendous. Rivets were sheared off and popped, skins were blown off or rolled out, the tank was flatened. Even the control cables were sheared by the impact! Ken McBride was only 30 feet away in the pits and said it was like a bomb. Busted rivets and metal flying around. One of the panels from the right side blew completely off and up against the Merlin's Magic trailer. No serious injuries, unbelievable. One man had to go the hospital with some hearing problems, and was later released.

Like the winners that they are, Team Merlin's Magic put together a plan, some help and started to work on Sunday morning. By the end of Sunday, the damaged P-51 was dismantled and on a flatbed truck. Fuselage, tailcone, wings and engine are the four major parts trucked away.

We certainly do wish them the best of luck with the rebuild. The rear fuselage and tailcone might be able to be repaired, but I don't know. The expolosion might have damaged the fuselage much more and require an entire fuselage rebuild. Whatever they have to do, we are pulling for them in 2007.

I'd like to thank Steve, Ryan, Mike and others who put up with me nosing around and asking stupid questions. Good luck to you guys!