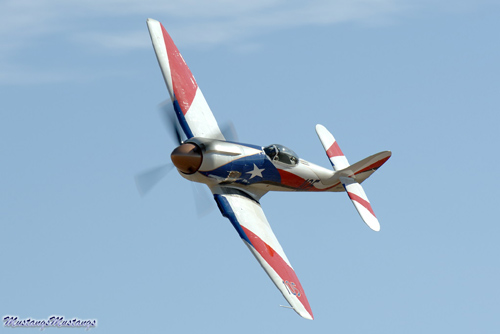 Stead Field, just north of Reno Nevada off Hwy 395 is home to the world's fastest motorsport - that's right, air racing. Each September for the last 42 years fans have come to see the fastest piston powered aircraft. And they come from around the world. I spoke with people from Germany, France, Asia and Canada. They got bit by the air racing bug. Come to Reno and you will be hooked as well. My first trip? Well, can't remember for sure which year, but early/mid 70's sounds right.

This year, the races began on Wednesday and continued through Sunday. Monday, Tuesday and Wednesday morning is qualifying and lots of action in the pits. You will also find a static display of top notch aircraft going after the Rolls-Royce Heritage Trophy.

During the day the heat races are broken up at times with very good airshow acts and military demonstrations like the A-10, F-18, Heritage and Legacy Flights, Canadian Snowbirds and the USAF Thunderbirds. Nonstop action. If you are bored, go home, there is no hope for you. You can pick up general admission passes which will get you in the main gate, the general grandstands and static display areas. Many race fans have to be close to the action and that means a pit pass. You can see the crews and the aircraft up close and make some new friends too.

Once you're in the pits, there's no going back. Of course there are reserved seating areas and box seating for those that want to treat all their buddies to a great week of air racing and airshow entertainment.

The weather this year? One word ... Spectacular! There was a little moisture that blew through very early in the week, but Monday to Sunday was mostly clear skies with highs in the 70's and low 80's. The wind kicked up on Friday and Saturday turning the evening kinda chilly, but Sunday was a winner with 70's and low wind.

So, who won? You gotta read on for that, sorry. John Penney flying the big F8F Bearcat "Rare Bear" was the returning champ from 2004 and he was running strong but Tiger Destefani's P-51D "Strega" had him in his sights as Tiger and crew returned to Reno from a few years off. Strega has won several times in the past. You can see all types of racers from little Formula One racers that have a wingspan of about a third of the large twin-engined F7F Tigercat, to the fully modded race cut unlimiteds at 480 mph and beyond. Nowhere in the world can you get this type of action. Start planning now for 2006. The dates are September 13-17.

So grab a snack and a drink (cause you're gonna be here for a while) and start clicking.