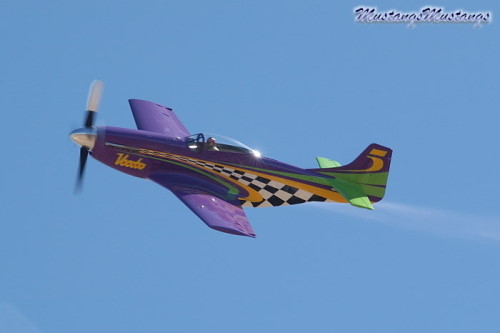 Practice is on Sunday. Qualifying for the races starts Monday and ends Wednesday. The top 24 entrants are in. Once all the unlimited aircraft have qualified, pilots can attempt a faster qualifying speed. The top 5 positions do not have to race until the Friday Gold heat race, all others have to start heat races on Thursday so there is incentive to get into the top five. Results from heat races determines the starting position for the next days' race. Dago Red had some last minute work before arriving at Reno. A few weeks before, Skip Holm had to execute a deadstick landing in Provo and very skillfully came away with a dent in the leading edge of the wing, which was repaired. They also had to rebuild the race motor unexpectedly just before the races. Other race teams face set backs as race week approaches and there is always last minute work going on.

You could not ask for a closer top two for qualifying. Dago Red just slipped inside the very fast time posted by Rare Bear. John Penny in Rare Bear posted a qualifying speed of 490.0 mph! Just after Penny, Skip Holm in Dago Red turned in a 490.8 mph. WOW! Third was Michael Brown in September Fury at 465, then Sherman Smoot in Czech Mate at 448 mph. Fifth place and last spot for a pass on thursday's heats was Dan Martin in Ridge Runner III who blew around the course at 446 mph and said he could push more if needed. Other notable P-51s were Brent Hisey in Miss America who qualified at 432, Bill Eberhardt in Merlins Magic at 423, Curt Brown in Voodoo at 416, Ron Buccarelli in Precious Metal at 405, Jimmy Leeward in Cloud Dancer at 391, Ike Enns in Miracle Maker at 386, Joe Thibodeau in Crusader at 378, John Bagley in Ole Yeller at 375, CJ Stephens in Speedball Alice at 358, Brant Seghetti in Sparky at 355 and Art Vance in Lady Jo at 344 mph.

The weather for qualifying for very good with winds not too bad and temps in the 70's/80's.

There was a Wildcat that qualified at 305 mph with Tom Camp at the controls, but that was only good enough for 27th. I also did not see Lady Jo in any races, because their qualifying time of 344 mph just missed the cut. Also missing the cut was Dave Morss in the Yak-9 "Anya" with a qualifying speed of 341 mph. Lots of Sea Furies, Michael Brown's Tigercat qualified at 364 mph, and Howard Pardue in his Bearcat came in at 383. There are 2 Yak-9s and Sherman Smoot in his Yak-11 that was very fast in 4th. A total of 13 P-51s in the races for 2004. There are also a few that come for the fun of watching the races and put their P-51 up for display. Jack Hovey (merlin engine builder) was their with his camo P-51, Terry Tarditi in Comfortably Numb, Chris Woods in February and Planes of Fame Spam Can. On site for the USAF Hertiage Flight was Bill Anders in Val Halla, and Lee Lauderback in Mad Max.

All of the official qualifying times and results can be found on the Reno Air Racing Assoc. website at www.airrace.org. They have a very nice search engine that you can use to bring up many types of race results over the years.