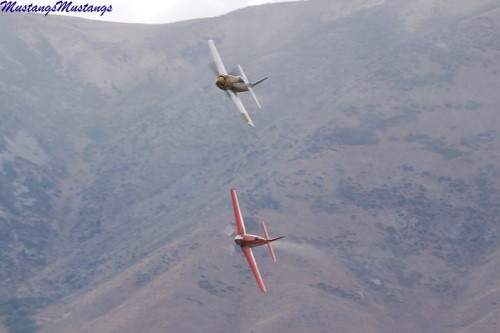 The Gold Unlimiteds
story and photos by Curtis Fowles

The stakes are building and this year at Reno is a record purse with $745,000 to be awarded to the unlimiteds. Now the weather is really a factor, clouds and drizzle are coming from the southwest and covering part of the race course. RARA decided to run the Gold race early so they would not have the possibility of any cancelations. The shots on this page with the grey background were from Sunday's Gold race. Dago Red on the pole, Rare Bear close behind, a few very fast Sea Furies as well.

Dan Martin in his P-51 Ridge Runner III would not be a factor in the finals. He had to make the call on Saturday, "race 20 is a mayday" as the merlin coughed and shook. Dan pulled up and out of the way and landed safely. The Ridge Runner crew worked all night to get Dan's stock merlin installed and working before the gold final. Hey, there's money and pride in just finishing and that's what they did.

Other P-51s in the Gold were #5 Voodoo with Curt Brown pilot and Brent Hisey piloting Miss America. Sea Furies, #232 September Fury with Michael Brown, #8 Dreadnaught with Brian Sanders and #13 Fury with Nelson Ezell as pilot were not going to go down easy. And don't forget about the Yak-11 #86 Czech Mate with Sherman Smoot at the controls. It is going to be a great race.

Will Dago Red be able to break that 6-peat record? Well, they have been running very strong all week with no big problems, while Rare Bear has been out of sight in a hangar during the week. Speculation was going aroung about metal found in the filters and that they were done. Rare Bear in the air did not show any weakness. They laid back a little on Saturday's heat and finished third, but most were saying that they were saving that huge radial for Sunday.

Michael Brown in September Fury, race #232 would not be holding back and could prove to be a spoiler. Voodoo has been running fast and is hungry to place in the Reno Air Races. That highly modified Yak with Sherman Smoot as pilot will be a factor.

The lousy weather would not go away and the shoot might become IFR, so Steve Hinton in the F-80 pace plane, flies a highly modified entry to start the race. It looked like they tracked outbound from the start and did a teardrop type turn to get lined up. Very good piloting skills are needed by all those in the race to get positioned and ready in a much shorter and more difficult starting procedure.

Down the shoot they come and it is Dago on the pole with Rare Bear close behind, September Fury 3rd and Dreadnought in 4th. Czech Mate, Fury, Miss America, Voodoo and Ridge Runner III fill out the field. But the top two are well ahead of the others coming across the line on lap 1. There's a tight race for 1st and a good race for 4th with Dreadnought holding off Czech Mate for now. During lap 2 you can see Rare Bear pull off a bit behind Dago Red, but not sure why. What happened to our great race we had going. Dago Red is going to make history, the Bear must be a bit sick like some thought it was. The Bearcat is still going fast, (John Penney's speed for the race for 470 mph in lousy weather) but you can tell the Bear is not pushing like the crowd wanted him to. Michael Brown is still in 3rd in September Fury and Czech Mate has passed Dreadnought for 4th place. The rest of the field remains as they started.

Across the finish line is Dago, Rare Bear, Sept. Fury, Czech Mate, Dreadnought, Fury, Miss America, Voodoo and Ridge Runner III. Dago did it!!! ... so we thought. But no, wait, he cut a pylon and not by just a little. In that lap (#2) where Rare Bear pulled back just a bit, Skip Holm was having trouble with windscreen fogging and cut pylon 4. John Penny saw that and knew he only had to stay close for victory. Very smart racing by a veteran. With the penaltly for the cut, Dago Red just stayed in second ahead of Michael Brown in September Fury. Here's the results:

And that's it. A very surprising finish. 6-peat history will have to wait for at least 5 more races, but I think the P-51s will be on top again well before that. Strega will be in the Race in 2005, Dago is back and still fast, Miss America, Voodoo, Ridge Runner, Precious Metal, Cloud Dancer, Crusader ... all contenders in the worlds fastest motor sport. I'm sure that the countdown to 2005 has already began for many race fans. If you are going, make plans early, rooms in Reno get harder to come by the longer you wait.

Congratulations to the Rare Bear Crew and John Penny. They truly overcame the odds to be holding that huge trophy for 2004. Now the hunter becomes the hunted ...

Thanks to RARA for a great time at the races. For all race results and information for the 2005 Races go to their website at www.airrace.org to get the latest. They have race results all the way to 1968 or so. It is well worth a quiet evening at the keyboard.