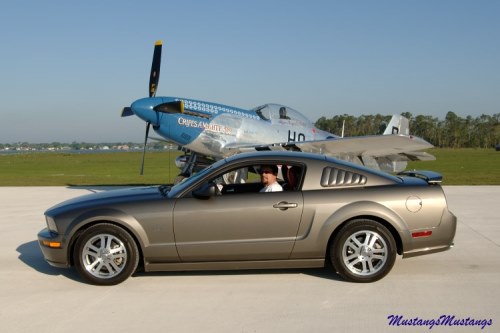 There are some very nice cars in the daily driver catagory. Some I suspect are not driven but a few times a month. A few look like they have been driven every day for a long time. Mods are everywhere. New, old, 70's and 80's, all of the years covered except the Mustang II era. Only saw 2 of those (but that's ok). The new 2005 models were plentiful and there was one 2005 convertible. The new owner, Kjell Gustufson from Europe, picked his up 2 days before and drove straight to the show.

All paint colors and types were on hand. A few custom paint jobs could be found as well, like the purplepurplepurple 90's era stang and a few with the multi color mystic paint and yes a couple pink mustangs (just for my daughter Chelsea).

A few early 70's convertibles were at the Mustangs & Mustangs show. Mach 1s, Boss 302s, Boss 351s, GT350s, GT500s, K codes, even some cougars and falcons. Oh, and a mustang station wagon! There were several hundred cars on hand. If you live in the area, or can plan a vacation around this show for next year, you will not be dissapointed ... more later.