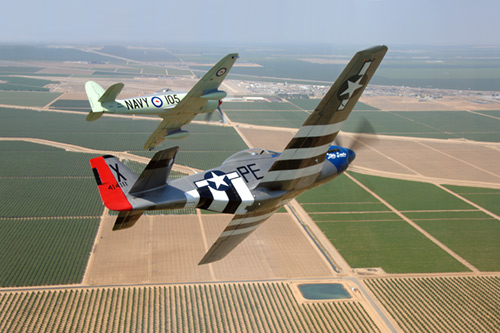 Just imagine you get a phone call, "hey, I got an empty seat for the Shafter show next Saturday ... are you in"? Well let's see ... um ... I might have to check my ... YES I'M IN! That's how it started. This page is mostly about the trip and my experiences in the back of a popular P-51 with one of the finest P-51 pilots in the world. I am going to try and describe in picture and word what it is like to be part of that.

Just a quick bit of info about me. I've been to a several shows as part of warbird flights, the most recent being the Gathering of Mustangs last September. I've flown into fly-in airshows in many different aircraft and consider myself very lucky to be able to be a part of that. I've been a pilot and a passenger, with family and friends. I have many people to thank for my fun at these shows.

Of course, I've driven to many shows over the years and hassled with parking, crowds and poor airshow organization just like most of you have. I've spent hours in the back of a 68 Ford Wagon waiting to get out of Stead in the 70's. The wait in the line of departures can also be a bit frustrating. I remember the line to leave a show being so long that we just pushed the aircraft until we were about 5 or so back and then started up to save some fuel.

Then recently (last several years) I now get media access to shows. To some shows (like the Reno Air Races, Oshkosh, the GML) the privelege is huge. We get to park very close to the gates, get free food, free passes and in some cases media areas for close shooting. At other shows, it is simply a free pass and a kick in the butt. With all these past experiences running through my head I drive out the airport on Friday with expectations like a 5-year old on Christmas Eve.

I packed light to fit my backpack in the gun bay and kept a small camera bag between my feet in the back of the P-51. We dusted off "Ridge Runner III" attached the tug and pulled her out. It's a beautiful day in Hollister, Ca with temps in the 70's. We are ready to go and have time to spare so we grab Mike Barrow (Sparrow V-12s) and Mike McKinley (whos is flying "Strawboss 2") and head over to the Ding-A-Ling Cafe for a nice lunch. The stories get better, the lunch is good and now we are set to be wheels up at 13:30.

I jump in, strap on the lap and shoulder harness, grab my camera and make sure that the settings I want to start with are dialed in. Elsworth Getchell is taxiing his Sea Fury with the big " NAVY 105" on the side. As he taxies, the wings fold down and lock. Dan starts up Ridge Runner and that smell of merlin exhaust fills the cockpit. We look over to Mike in Stawboss as he turns the V-12 into action. Everyone is running, now we taxi and preflight. Three thumbs up and we are ready to go. Getchell is lead and blasts dust all over runway 31 from the runway resurfacing work and I hear a comment about that on the intercom. Mr. Martin does not have any trouble expressing himself :)! We are next.

Dan pushes the Merlin V-12 power on and I get squeezed back in the seat - cool. Are we airborne? Hope so because the gear is coming up. Martin is very smooth on the controls. From the brake release to the gear in the wells, the take-off from Dan is one fluid motion. We bank left to intercept Getchell for the join-up. Gethell flies a left 270 degree turn (for the join) and then onto San Luis to find the "Comfortably Numb" P-51. We try to reach Tarditi but now answer, so we circle to the right around the reservoir. Radio contact is made as Getch tries to determine his location. By the time we get around the circuit, Terry is past us a bit so we cruise on route to catch him.

How cool is this? I mean, wow ... words are tough to come by when you are flying right wing to a beautiful Sea Fury and off his left wing is another P-51. Am I really here? Wow, this is ... (I'm still searching for the right words). We are still searching for Terry too. Dan spots him just ahead, a simple speck in the sky. As soon as we catch him Getch will shove him in the slot. Some light chop on the way up but the air is smooth at cruise. The view is spectacular even though the sky is a bit hazy. I am torn between trying to capture images between the glare or just looking around at the sight of warbirds in close proximety at 5,500 feet.

The P-51 has awesome visibility, but the canopy was not designed for photographers. The glare comes from everywhere and is in every shot I take. You can see it in many shots and there is little you can do. Some might criticize my photos because of the glare but I want you to see what it was like, exactly what it looked like from the back of Ridge Runner. I also included the canopy frame, cockpit and wings all for the "wish you were here" affect. The canopy also distorts as you look lower by the frame.

It is difficult to shoot to the side out of the P-51 with a large camera. Looking back is even harder so when Dan is not watching I slip my shoulder harness down so I can turn a bit easier. As we near the airport, the harness goes back tight. We cruised at 5,500 feet, parallel to I-5. Not much to see down (cows and farmland), but off the left you can spot the peaks of the snow capped Sierra Nevada Mountains and off to the right is the Diablo Mountains. Half way down we cruise by Lemoore NAS where Getchell goes to get his US Navy Legacy Flight certification. One year the Sea Fury was down so Getch got certified for the Legacy Flight in a P-51.

The temps aloft are nice, and this P-51 has a good passenger air vent to keep you cool. On a hot day you can really cook inside the P-51 until you climb for cooler air. Getting closer to Shafter now and Getchell takes us down to pattern altitude. The air turns warmer and choppy but not bad. Getchell sets us up for two passes. The first is a diamond pass and the second is echelon right for the left break to land on 30. The passes are down runway 35 which is close to the show line.

We break and Dan greases her down. Taxi, shut down then we gather our stuff, put the P-51 down for the night and go over to Al Goss' Warlock trailer for something cool to drink and some good conversation. We hang out for a while, then the CAF Zero comes overhead with a Hellcat escort. Other aircraft are showing up, the weather is perfect. Later after more cool drinks from the Warlock camp, we walk over to where the Witch is parked, because inside the Witch's hangar is a bbq. I spot a few people I know and meet several new folks. The Provenance Fighter's Sea Fury is in the attached hangar looking very nice. More people show up.

After a very pleasant evening, we go get our junk out of Warlock's trailer where we stashed it. Allen is kind enough to give us a ride to the hotel after showing us his outstanding ranch. I settle in, bang on the wall and tell Dan to keep it down ;) and get ready for another exciting day. Check the cameras, look at some of the shots from today. There should be a few good keepers in there ...