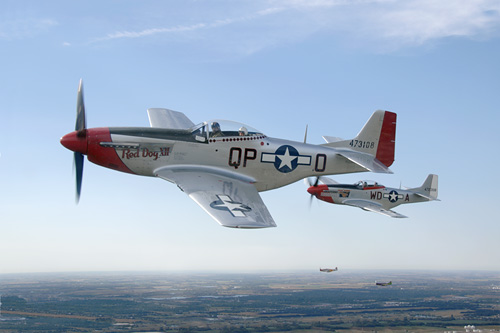 Tuesday started at 0:dark:30 to be on time and in the air at first light. Our flight started with one P-51, Duane Doyle's "Red Dog XII", and his King Air (nice!). We picked up mustangs as we traveled southeast to Prescott, Az. First was Dan Martin in "Ridge Runner III" out of Hollister, Ca. We joined up over San Luis Res. only a few minutes after lift-off from Livermore. The sun was just lifting above the distant Sierra Nevadas. I can get used to views like that.

The others joined us at Prescott where Jeff Harris and Jeff Pryor were waiting and refueled. After we landed the King Air and two P-51s, Bob Button and Brant Seghetti stopped by and the ramp was starting to look very nice. Fuel, water and get out of Button's way as he is headed for the terminal building.

Well, weather has us pinned down in Wichita, Kansas. We have sunny skies and mild temps and want to keep it that way. We were supposed to stop Tuesday night at Joplin, Mo, but weather was bad. A line of storms between us and Ohio. The King Air would be just fine, but the warbirds have to sit it out until it passes Columbus.

We went nowhere on Wednesday but hope to resume Thursday morning. One stop somewhere in Indiana and we should be at the GML 2007 just after lunch. There are still some lingering showers forcast for Thursday, so we will have to dodge a few.

I have to say that I am having a great time. Everyone in this group is fun to be with and the stories are entertaining. I have to thank Dan Martin and Duane Doyle for allowing me to tag along. Duane's King Air is so nice to fly in. Air conditioning, pressurised, quiet, snacks and drinks within an arms reach. Thank you! I am kind of torn between the nastalgia of the P-51, the power and the awesome view versus the comfort of the King Air.

If everything works right, I will be in the flying Jelly Belly with much thanks to Brant. We should be part of the 2nd flight of four in trail of Dan, Duane, the King Air and Bob Baker. Dan Martin has already bummed several packages of goodies from Brant and Jelly Bellys were my lunch at Tucumcari, NM on Tuesday.

But a few packs of Jelly Bellys were not enough as Dan took the whole bag from Brant the next day! I got proof as Dan smiled for a shot holding up the goods.

I will tell you that dinner and ice cream tonight was tons of fun. I sat with Jeff Harris, Bob Button, Jeff Pryor and Dave Pryor (F-15 driver). Jeff Harris has some very cool video from his on board cameras. My favorite is the tail chase behind Croul's P-38. It is awesome. Bob will keep you laughing all through dinner and on the way home. You should have seen the pile of ice cream Dan Martin had. He was using both arms to lift that cone.

Off to bed and up at 05:30. You know the routine, yup ... hurry up and wait! Check the Wx, looks ok for the first leg, but Columbus is still in the junk and forecast to stay bad until afternoon. So much for getting up early. We go out to Jabara Airport in Wichita and wait a bit more. Then as I was wondering off to the south end of the ramp, Dan calls me and says I better get my $%* over to the Jelly Belly P-51 or Brant was going to leave without me.

Enough said, I was there in no time. This leg was from Wichita to Bloomington Illinois (isn't there a Bloomington in every state?). We took off at about half a runway intervals and joined up as the King Air did one climbing 360 around the airport and then on course. We climbed to 11,500 and the first half an hour or so was on the edge of a lower overcast. The King Air was lead with Dan Martin and Duane Doyle on each wing. Brant Seghetti was lead of flight 2 with Bob Button on the right and Jeff Harris and Jeff Pryor on our left. Bob Baker was behind us by a few minutes.

A short time later everything was clear and very smooth with a few lingering clouds. About half way through the flight, we had to climb a bit to get over some more clouds. That was the highlight as the four P-51s in our flight flew through a valley of clouds as Brant took us up and over the last section ... very cool. Coming into Bloomington I could not help but to notice the tall windmills (generators) on initial to 29.

We had a nice long break with pizza, sandwiches or Chinese for lunch. Check the weather again, then again. It is slowly getting better in Columbus. Finally, the word is go as I heard someone say 5000 ovc, 2000 bkn. After we fired up and started to taxi, Jeff Pryor literally fires up as his merlin does not want to start. Moments later we are all taxiing out to the active.

This will be the last hop to Columbus if the weather holds out. We climbed to 9,500 where it was clear and smooth, but as we got about 80 miles out, the lower we had to go. Looks like the weather is moving slower than predicted. The temperature jumped up about 20 degrees as we get down under the lowest layer. Brant is following the first flight and keeping us clear. He showed me a few towers after we landed that you have to be aware of around this area. Weather was not getting any better, but I heard "clear to land" for the first group, so I know we are close. Less than a minute later and we are in the break with everyone turning three seconds behind each other.

Brant greases her in and we taxi up to the line and shut down. It is about 5:40pm local time. Yes, we are here. By the looks of all the water around, they must have got a pounding of rain earlier. The skies are slowly clearing and P-51 Mustangs are showing up every few minutes for the rest of the day.

Today was a great day! Thank you to all the people in this Mustang Flight. It was a pleasure being a part of a memorable trip.