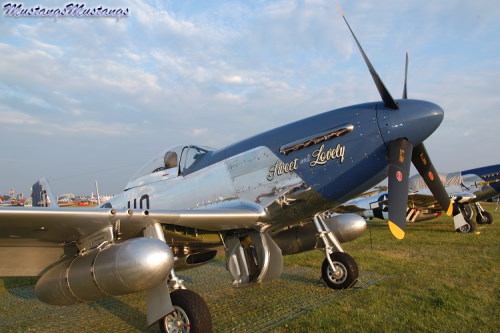 2004 Oshkosh is a great venue to showcase newly restored P-51s and other aircraft. You can enter your warbird into the hat to be judged and the competition is always very stiff. This year there are two newly restored P-51s battling with others for that top spot Warbird Grand Champion. Several P-51s have had that honor in the past including . There is also Best P-51, Reserve Grand Champion and . One very unique P-51 is the TF-51C owned by Max Chapman, raising his P-51 count to three. This one of a kind P-51 was restored/built by John Muszala of Pacific Fighters in Idaho. This a unique TF model with the norm full instrumentation in the back, sans gear lever and fuel selector. Up front is a very good mix of new avionics and old layout and styling. Outside is a polished airframe marked up as a war weary squadron hack that was used to transport passengers or for training. When I first heard of this paint scheme, I was worried that they were going to put the light blue paint scheme of the 4th FG hack that is seen in some of the books. Cool heads prevailed. This paint will only last a year or so and it will be repainted with a 15th AF red-striped tail like Chapman's other P-51s.

I am not a fan of the looks of the TF-51D with the huge canopy, but the C model does not stand out of something being different or weird. The frames of the canopy had to all be custom made, piece by piece. Get up close and look at it. It is a very nice piece of work. The difficulty is to put it all together, then make it work normally, then create a way for it to be quick release. Put that all together into something that will work every time without fussing and constant adjustments and that's all there is to it. John recessed the landing light into the wing. Another nice piece of work. Oh, and yes it works too.

There was a nice display of pics from the 4th FG and restoration pics to see on the huge backboard right next to the mustang. John flew the TF to Oshkosh from his shop in Idaho.

Right beside WW12193 is the first restoration I've seen with the green nosed paint job of the 359th FG. There was a fiberglass model hanging in a museum somewhere that had a green nose paint scheme, but that's the only one I know about. It is nice to see something different. This P-51, 44-63807, is owned by Charles Somer of Sacramento Ca and restored by Mike Vandeboceur at . This P-51 like Chapman's, is fresh out of the restoration shop. Mike and John are not strangers to producing first class restorations and "Daddy's Girl" is stunning. N20MS is a P-51D but has the Ezell dual-control option installed for the GIB - cool! There is the addition of some basic instrumentation like power and airspeed, but no panel like a TF. All this is in a standard size cockpit and canopy.

Everything looks brand new, better than off the NAA factory line. Attention to detail is everywhere. Additions to the pilots panel include a com/nav/gps screen that is a very welcome site for the pilot. Like Chapman's TF-51C, this is another good mix of new and old. Mike has produce award winning P-51s like "Lil Margaraet". The fuselage is polished, the wings painted silver, the engine is fresh and looks immaculate.

Walk a couple of rows to the north and you will find a blue-noser. Well there are plenty of blue-nosers at Oshkosh, but this one parked on top of WWII metal runway planking on the grass. That's cool but look under the wings and you will see 2 drop tanks hanging. Not just the 75 gal metal tanks you have seen, but the old WWII 108 gal paper tanks that were used heavily. The paper tank was a great idea. Very light in weight, and when dropped, the enemy was not given any materials that it could reuse. All of this and a very nice display table of WWII memorbilia and restoration photos.

This blue-noser is named "Sweet and Lovely" for Buck Patillo, WWII P-51 legend and ace. Bob Baker of Oklahoma, is the proud owner and head restorer of this P-51, 44-73279 N451D. He finished it in time for last year's EAA Airventure, but did not receive the top prize. He also owns another P-51, "Oklahoma Miss" 44-73463 N351D. Bob and crew have done the majority of the work on the two P-51s. Some of the substructures were sent out to restoration shops. Bob has certainly taken his experiences from some past judging and put it to great use in 2004. It is not just the P-51 that wins, it is the whole display that puts forward a setting for the judged P-51.

Bob Baker and "Sweet and Lovely" won top honors this year as the Warbird Grand Champion. Congratulations go out to Bob and his crew. It is tons of work to get to Oshkosh for a display such as these fine P-51s. Sometimes you walk away with a smile and a trophy, and other times you might be grumbling a bit. So much work in involved, someone is bound to be disappointed with the results of the judging. It would be very hard for me to pick one true winner. Chapman's TF-51C was a true accomplishment to see, Somer's "Daddy's Girl" was a winner to all those who marveled at it up close, but "Sweet and Lovely" just seemed to take you back in time and leave you there while you were around the aircraft. Excellent display and restoration.

I am looking forward to finding out what 2005 will have to offer. There are always more P-51s in restoration and many use Oshkosh as their debu for everyone to marvel over.