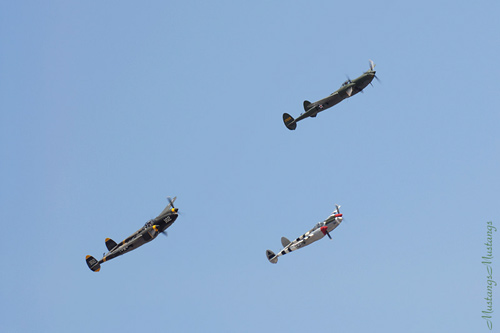 The Lockheed P-38 Lightning
story and photography by Curtis Fowles

The P-38 first flew in 1939 after Lockheed was contracted by the USAAC to build a fighter-interceptor that could fly 360 mph at an altitude of 20,000 feet. Kelly Johnson led the design team at Lockheed. During the test flights, Lockheed engineers had trouble with compressibility which shows up during high speed dives. These speeds had never been attained before and there was little or no test data to work with. The Lockheed crew finally overcame the problem, but at least one test pilot was lost trying to recover from a dive.

Lightnings entered WWII in April of 1942 in the Pacific. The P-38s served in all campaigns of WWII and performed well in many roles. The Germans nicknamed them "der Gabelschwanz Teufel", or the Fork-Tailed Devil. P-38 pilots quickly learned to use the P-38's speed and climb advantage if they were caught up in a dogfight.

The Lightning's firepower proved lethal to anything in its path. With all the guns in the nose, there was no convergence issues like in the P-51 or any other WWII fighter that had guns in the wings. The P-38 was a very stable platform, accurate and carried a punch that the enemy would soon fear.

There were three P-38s at Chino and three different variants also - the P-38F "Glacier Girl", P-38L (Jack Croul) and the P-38J "Skidoo". The P-38L was the largest production variant with 3810 built by Lockheed and a hundred plus more built by Consolodated-Vultee in Nashville. The last block of the J versions were fitted with dive brakes (flaps) under the wing to alleviate the compressibility problem that plaqued the P-38 for some time. In total, 527 P-38F models were produced. The "E" model was the first model suited for combat. The "F"s began delivery in April 1942.

The P-38 was also used in reconnaissance and ground attack roles. The two counter-rotating V-12 Allisons were supercharged and have a unique sound to them. Some call it smooth, others quiet, but whatever you call it, it is very distinctive. Once you hear it, you will always know that a P-38 is near.

That very distinctive "smooth" sound was heard times three at Chino, Ca on the third weekend in May 2007. It was very impressive to say the least. Pass after pass, the crowd could not get enough as they criss-crossed around the field giving us warbird fans several views and many passes to enjoy. Currently these are the only three airworthy P-38s in the world. That will change later this year or into 2008 as Lefty Gardner's old P-38 is being rebuilt now.

What a memorable show to see these three classics airborne together. Thanks to the Planes of Fame Air Museum for producing such a special event.