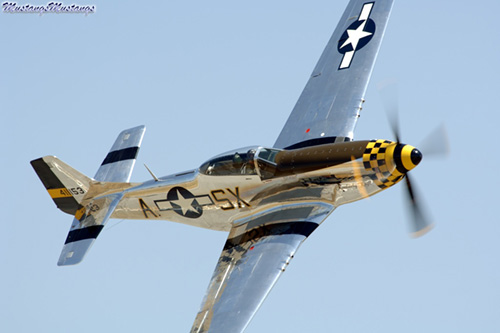 That is what Chino is all about. They have ... well, ... all of them. At least it seemed that way. Over 20 warbirds in the air at the same time and in the same fly-by. Wow, what a sight.

They flew in groups during the show and then in that massive gaggle at the end. All the warbirds fly a close-in photo pass for the crowd. This is the show where you can get real nice photos of warbirds in the air without a 100 pound lens on your camera.

Of course, sometimes you have to put up with the infamous haze of southern California. But we were treated with a clearing on Saturday afternoon and by the end of the day, very good visibility was on tap.

Sunday was a big, big blah though, with overcast persisting all day. That did not stop any of the flying though, just made for some very flat photos.

Chino puts on an outstanding show, showcasing a huge amount of warbirds. A must show for any warbird freak. Each year, about the 3rd weekend in May is when it all takes place. So, get out the calender for 2007 and started circling.