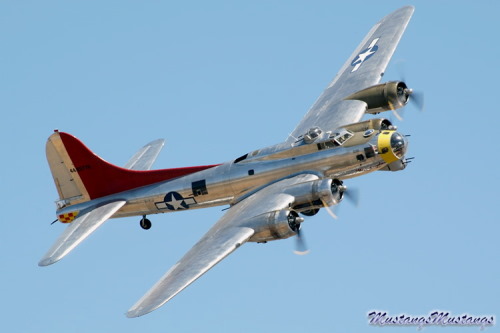 The United States Army Air Force of World War II was represented well at the show this year. This year, the fighters included the P-40 Tomahawk, the P-51 Mustang, the P-38 Lightning and the featured warbird, the P-47 Thunderbolt. Too bad there were no P-39s or P-63s this year.

It was way hot at the show, and all the pilots must have been cookin' in their flight suits and non air conditioned warbirds. They performed extremely well and the aircraft took the heat in stride as well. Except on Saturday, the P-51 in the Heritage flight was stuck on the ground too long before departure and ended up not departing. HF on Saturday was the A-10 and the P-47, but on Sunday the P-51 made it up with the A-10 and P-47.

This is a warbird lovers' warbird show. They just keep coming ... one then another. They pass close to the crowd for very good photos. They also taxi right by the show line before departing. Nonstop warbirds.

USAAF bombers? Yes, we had a couple B-25 Mitchells and a B-17 Fortress giving the crowd some nice passes. One thing about the Chino show is the warbirds do not do one pass and then depart. They go around the circuit many, many times. Even in that heat, the pilots seem to be really enjoying the show.