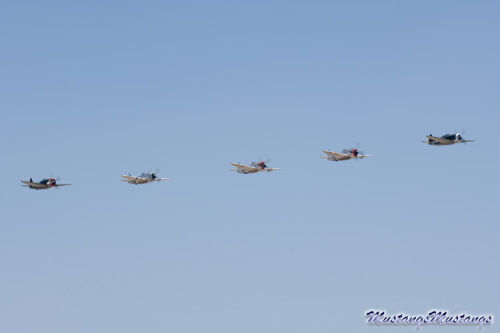 The Air Museum, Planes of Fame Airshow 2005 is upon us. Warbirds from all over California and some from Arizona, maybe a few from Nevada will decend upon the often hazy skies around Chino, Ca. The show is on for two (2) days, the 21st and 22nd of May, 2005 and the gates are open at 8am.

Mustangs, Thunderbolts, Warhawks, Lightnings, Corsairs, Hellcats, Bearcats, Mitchells, Tigercats, Spitfires, Wildcats, Skyraiders, Huricane and even a Flying Fortress, a Dauntless and a Zero too(2)! Plenty of warbirds for you piston engined freaks.

This year the Republic P-47 Thunderbolt was showcased and the rumors were true, there were five (5) airworthy P-47s in attendance at the show (very nice). In the photos on this page you can see Steve Hinton at the controls of the Museum's P-47 over southwest Chino. Steve is a masterful pilot and flies all of the Museum's warbirds. The photo pilots for the shoot were Dave Foster in the C-210 and Bob Lewis in the C-182. Both flew steady and smooth for us photogs at the preview. The jets at the show included an F-86, a Mig-15, the A-10 Warthog and the F-18 Super Hornet.

Don't miss the National Anthem and the Missing Man Formation with four (4) P-47s which starts at 11:20. Here's a quick run down of some of the events:

If that's not enough, there was a large static display and of course good food to enjoy and vendors to browse. Warm California sun with blue skies is what was ordered for but they delivered a scorching hot weekend with temps near 100 degrees. But, we did have clear skies.

On a weaker note, you have to park in a plowed cow pasture! So if it's not so dusty and stinky that you can't stand it anymore, then you are in mud from the water trucks trying to control the dust. It is also quite a walk to and from the show line from the parking area. They do provide shuttles, but be ready to wait a while except during mid day.

Be ready for hot weather. It is May in Southern California. You might get a perfect 70 degreee day, or like this year, you might get a scorcher. It was 100 degrees, or more, and you have to drink plenty of water, wear a hat and sunscreen and take a few breaks in the shade of a big wing if you want to last all day.