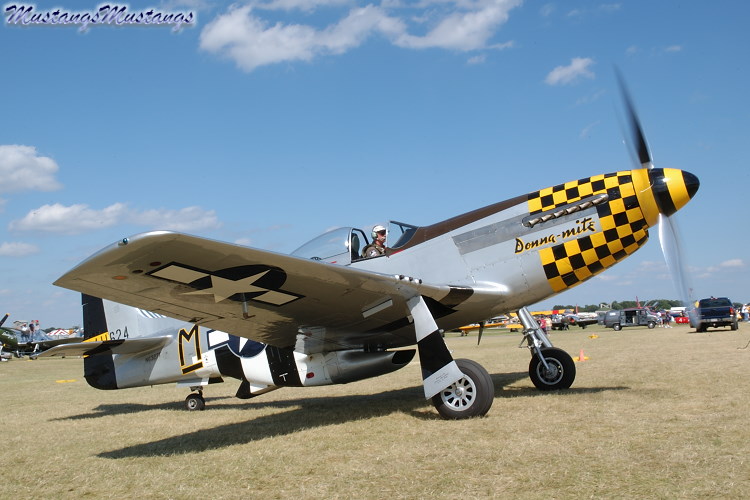 Begin excert from the NTSB:

On July 26, 2005, about 1600 central daylight time, N6327T, registered as a North American F-51D airplane, piloted by a private pilot, was destroyed on impact with terrain while maneuvering near Malone, Wisconsin. The personal flight was operating under 14 Code of Federal Regulations Part 91. Visual meteorological conditions prevailed at the time of the accident. No flight plan was on file. The pilot sustained fatal injuries. The local flight departed from the Wittman Regional Airport (OSH), near Oshkosh, Wisconsin, about 1525.

The airplane departed OSH with three other airplanes as a flight of four airplanes to perform the missing man demonstration at the air show at OSH. The accident airplane was the no. 4 airplane in the flight. According to the lead airplane's pilot, the flight of four was holding in a V-shaped formation on the east side of Lake Winnebago at 2,000 feet above ground level. The flight leader asked the air show's air boss how much longer they would have to hold before the flight's performance could start. The air boss stated it would be about another 15 minutes. The flight leader called a formation change to four airplanes in trail and the flight performed a ground reference maneuver called lazy eights. During the lazy eight maneuver, the flight realized that the no. 4 airplane was not in trail and began a search for it.

The crash was on the other side of Lake Winnebago in a farming community. The crash site was small. There were witnesses to the crash. It appears that the P-51 stalled or had limited control at the top of a lazy eight. The aircraft never finished the maneuver and then while partially inverted the aircraft nosed down towards the ground before impact. There was no indication by James of any trouble.

I was able to speak with Gen. Reg Urshler, who was a friend and flying in the formation with James. Gen. Urshler had the nicest comments about him. We lost another great man. They had the funeral in James' town later that week. Several P-51s and other warbirds left the Oshkosh show for the funeral. Warbirds, including several P-51s, flew over James' funeral in his memory.